Have you ever wondered what it would be like to age 40 years in a matter of minutes?

By 2030, 20% of U.S. residents will be 65 or older, according to census data. Figures like that are part of what's driving the use of age simulation suits, which let designers experience the physical impairments of old age while navigating public spaces.

Samantha Flores and Mike Steiner with the Dallas-based architecture firm Corgan each donned the suit — which weighs about 30 pounds and adds four simulated decades — in public settings like an airport to better understand the challenges elderly people face simply moving around.

They say the idea behind the experience is to apply that firsthand understanding to make their building designs more empathetic and accessible.

"One of the things that we really took away from the staff that ran through the scenarios is that having the hearing and the sight losses is really isolating," Steiner tells Here & Now's Robin Young. "So even though I was at the airport [and] I did not have a flight to catch, I couldn't understand half of the announcements. The losses that you have can be a little bit overwhelming." 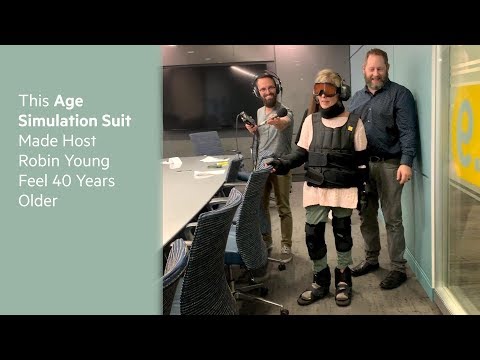 The so-called GERT suit — short for gerontology, the study of aging — is made by a German company and comprised of weighted Velcro components that attach to the wearer's chest, arms, hands and legs. Then there's a set of hearing loss-inducing headphones, a neck brace, a pair of goggles to simulate vision impairment and, finally, overshoes at the feet, meant to evoke feelings of nerve loss at the extremities.

"Just knowing this really helps you to understand a little bit more empathy whenever you're designing," Flores says.

On how the suit works

Mike Steiner: "It's a series of straps that reduce your mobility, and it's a series of weights that simulate what happens when you age. You actually lose muscle mass, so your body feels heavier. These are elbow braces that mimic reduced movement in my elbow joint. As you age, you lose dexterity and your fingers. So those gloves simulate the loss of dexterity.

"We've got weights at the extremities, both at my wrists and at my ankles. So that helps make your body feel like your limbs are heavier. And under my shoes are what's called overshoes. These simulate some of the nerve loss that you get as you age. You lose the nerve context that you have at the bottom of your feet that tell you where the ground is.

"These goggles simulate general vision loss. [The headphones,] as hearing loss continues, you're able to hear less and less. The suit itself is approximately 30 pounds, and then they're about 5 pounds at each wrist and 10 pounds at each leg."

Samantha Flores: "The first thing that I noticed is that it takes a longer time to get to different places, and so the need to rest and to sit is very impactful: have more benches, have more places for someone to grab on to. Typically we design these concourses to be wide-open spaces so that multiple people can move. But there's not really a place to grab on to if you've lost your balance, or if you just need a moment to rest."

Steiner: "The shininess of the floor tends to draw people's attention down. People that have fallen once are a lot more focused on not falling again. Not only sheen on the floor, but sometimes the light fixtures above can kind of disorient folks as they walk through the space. Obviously as architects, we're very cognizant of transition changes, because that's a code requirement. But knowing that there will be circumstances where we need to use ramps, we want to be very cognizant that those are delineated as best we can, so they don't catch people by surprise."

"I was a little timid, because it reduces your speed. It makes you feel like you're about to get run over."

Samantha Flores, on her experience wearing the suit

On using escalators while wearing the suit

Flores: "When we tried the age suit out in the airport, it [was] difficult to get onto the escalator if it's a two-step escalator. So we started recommending three-step escalators in all of our public spaces in airports. That means that it gives you an extra step that's flat before it starts descending down."

On how it felt to wear the suit

Flores: "I was a little timid, because it reduces your speed. It makes you feel like you're about to get run over."

Steiner: "Sort of — and I say that because I happen to be blessed with a family that has had a lot of people in the 90s to hundreds. Something like this has made it more accessible to our industry."

Flores: "Having a friend that has gone through having multiple sclerosis, and understanding that to get her on a trip with us is a challenge. She has to plan months in advance. She's not in a wheelchair, she's doesn't have a cane. She has a disability that people just don't understand."

Marcelle Hutchins produced this interview and edited it for broadcast with Robin Young and Todd Mundt. Jack Mitchell adapted it for the web.