Fifty years ago this week, the profoundly polluted Cuyahoga River — oozing with oil, chemicals and sludge — burst into flames.

There are plenty of myths about that June 22, 1969, fire — but its legacy is clear. Unlike previous fires on the Cuyahoga, news of the blaze spread across the U.S., fueling the country's young environmental movement.

The fire has long been extinguished, and Clevelanders are set to remember it with a series of 50th anniversary events. Even as the history fades, local residents like kayaker Kate Schneider are continuing to develop a relationship with their cleaner, healthier Cuyahoga.

"I grew up in Cleveland. I know Cleveland really well. But when I'm on the river, I have no idea where I am because I've grown up in a city where we've turned our backs to our lakes and rivers," Schneider says.

Cleveland native Jane Goodman, executive director of the Cuyahoga River Restoration, says some people think a fire is still burning on the river.

"Believe me, there are people who say to me, 'Oh you mean the river that catches on fire?' " she says.

The 1969 fire was caused by a spark from a train going over a trestle, which lit some of the garbage floating on the river. In total, Goodman says the blaze lasted "give or take" 20 minutes.

Garbage fires on the Cuyahoga were such a common occurrence, she says, that no one took photos of the event.

"When it was mentioned the next day in the paper, it was like in an inner page. It wasn't even front-page news," she says.

Eventually, Time magazine caught wind of the ongoing fires. The magazine ran an article accompanied by a 1952 photo of the river on fire. Although the 1952 photo was over a decade old by then, it was a "much more photogenic" picture of the ghastly scene, Goodman says.

The multiple Cuyahoga River fires — combined with Time's publication of the 1952 image — are considered the catalyst that resulted in the Clean Water Act and the creation of the Environmental Protection Agency.

Goodman calls the series of events "the perfect storm."

Then-Mayor Carl Stokes, the first black elected mayor of a major U.S. city, "recognized that this wasn't just a water quality issue. It was a social justice issue," she explains.

"He got the city to pass a $100 million bond to start cleaning up the river at the same time the Time magazine article came out," she says. "There was this terrific photo of the 1952 fire and people bought it because it was a follow-up to the [Apollo 11] moon landing and on the cover was Teddy Kennedy in a neck brace. It was the Chappaquiddick issue. So the reason so many people found out about it was because they read that issue of Time magazine."

By 1969, Goodman says the river had caught fire 13 times — and that's only the instances they have a record of. To many, the Cuyahoga was seen as "an open sewer dump site," Goodman says.

"Tar, building materials, chemicals — everything you didn't want in your neighborhood, you put by the river," she says. 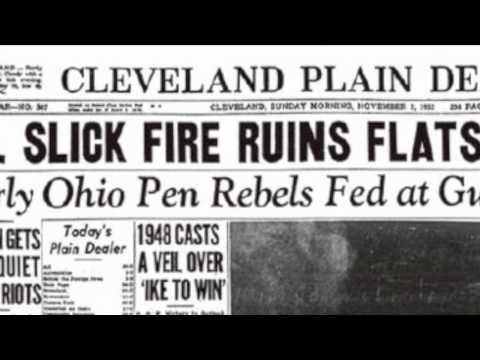 In short, the Cuyahoga sorely needed Cleveland's attention. Then one Clevelander decided to take matters into his own hands.

Frank Samsel, who started the chandlery that served the city's maritime businesses, outfitted a boat called the Putzfrau — German for "cleaning lady."

"That made it possible for the rest of the major cleanup efforts to happen," Goodman says.

Samsel's son, Mike Samsel, says his entrepreneurial dad saw that the city's cleanup efforts weren't efficient. So he invented his own equipment.

"Dad designed the boat to use a vector which would pick up the oil off the surface of the water. And in the other end of the boat, there was a crane that would pick up all the debris and we put those in 18-yard dumpsters. Those would be removed with the truck and then we'd pump the oil out of the boat," he says.

Samsel got to tag along on the Putzfrau with his dad. Now, five decades since the river was ablaze, Frank Samsel will be honored for his work.

"I think it's wonderful that we've come so far and that they are giving dad credit for some of the work that he's done," Kathy Petrick, Samsel's daughter, says. "I'm so proud of Cleveland. I mean, they cleaned up the river so fast that within 20 years, the boat was out of service."

Goodman with the Cuyahoga River Restoration agrees: It was the citizens of Cleveland who decided their river had to be protected.

"When you stop poisoning something, it can start healing," she says. "Most of the recovery had to do with businesses being regulated [and] not being able to add to the problem. And this wasn't just [the] Clean Water Act. It was [the] Clean Air Act, because a lot of what landed on the river came from smokestack industries."

Now, Goodman says Cleveland has a responsibility to "very carefully" balance the river's recreational role with ongoing industrial use.

"When people started using it recreationally, the operators of those huge vessels were terrified and they still are. They don't want to kill anybody, but they cannot see a stand-up paddle boarder," she says. "And remember, those ships are 700 feet long and they're 100 feet wide. This river, at its widest, is 136 feet."

Cleaning up the river hasn't just been environmentally beneficial. It's also had a huge economic impact on the city, Goodman says.

"Some of the people who never would have invested now see it as a prime place to invest. People who would not have lived on the river now see it as a wonderful place to live," she says. "People who would never have thought to bring their kayak past the natural river now bring it into the ship channel. The warehouses that the river brought cargo to are now lofts and apartments and condos and they're sold out."

"Amazing things can happen when you don't give up," she says.

Correction: An earlier version of this story referred to Carl Stokes as the governor of Ohio when the Cuyahoga River fire took place in 1969. In fact, he was mayor of Cleveland. We regret the error.

Karyn Miller-Medzon and Robin Young produced this story and edited it for broadcast with Todd Mundt. Serena McMahon adapted it for the web.

Here is the Cuyahoga River time-lapse video mentioned on the air: 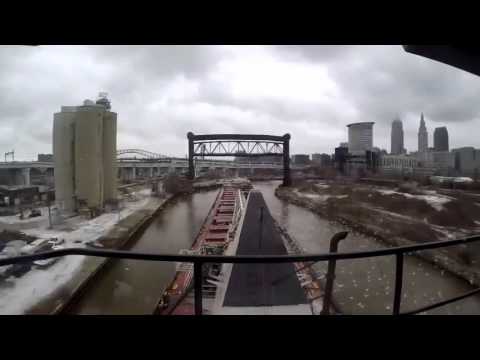 This article was originally published on June 18, 2019.