Editor's note: This segment was rebroadcast on April 16, 2021. Find that audio here.

On a recent trip to Iceland, we joined a sold-out crowd in a Reykjavík auditorium to listen to poet, author, environmentalist and former presidential candidate Andri Magnason. Audience members weren't exactly sure what to expect. After all, how does one translate a book on climate crisis into performance art?

As one audience member told us when asked what would happen: "I'm not sure. But I believe it will amaze."

Well, it did, and we don't even speak Icelandic. For over an hour, people cheered and laughed as Magnason told stories; they teared up watching giant slides showing his grandparents perched atop a glacier or standing beside a biplane.

He played archival songs passed down through generations of Icelanders, and all throughout ran a thread of how our past connects to our understanding of how climate change will affect our future.

That theme was driven home for him last summer. It was Magnason who wrote the words that would adorn the memorial plaque placed on the OK Glacier site, where Prime Minister Katrín Jakobsdóttir delivered her eulogy.

"It was kind of like sending a message to the moon or something; a message to somebody who might stumble upon it,” he says. “Just to acknowledge that we know what is happening and what needs to be done and only you know if you did it." 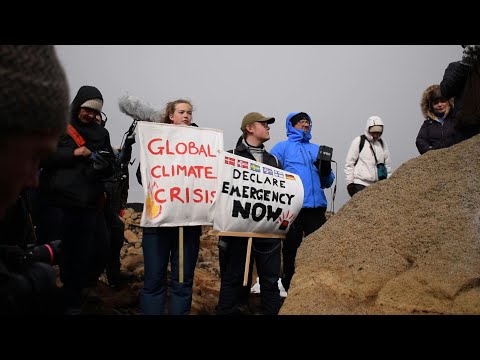 Magnason's new book, “On Time and Water,” searches for a new way to characterize the climate emergency because, as he says, the issue is bigger than language.

Often times, “fundamentally large” issues concerning the climate can be hard to quantify or digest in real-time.

"People don't cry, or they don't run, or change their behavior,” he says. "Just like a black hole, you can't really see it. So the only way to understand the scale of a black hole is not to look at a black hole but to look into the periphery."

Instead, Magnason challenges us to think of the year 2100.

"It has no meaning for us because it's not there,” he says. “Think about your descendants in the year 2100. They don't exist."

Humans often tend to think of the future as some dystopic timeline, he explains, and not an intimate time that will include those we will know and love.

It's for that reason that people aren't terrified when they hear about ocean acidification, which he calls the “biggest word” in the world.

"It's not loaded with anything," he says. "It's like the word nuclear bomb when it was still a theory. So the idea is that it's better to talk about the past."

In his case, that means talking about his grandparents, because, he says "they're fully loaded."

One of his grandfathers was a founding member of the Icelandic Glacier Research Society; his grandmother one of the first women on the glaciers when they were essentially unmapped. Another grandfather was a surgeon who operated on Robert Oppenheimer; an uncle, a famous crocodile researcher; a great aunt who was J. R. R. Tolkien's nanny, who inspired the author to model his Middle-earth after Iceland.

Magnason says he uses the past do draw a line to the future, asking young people, "When is someone still alive that you will love? Born around 2070, when is that person still talking about you as their major influence in their life?”

That means, he says, the person they will love, who they can touch, is still alive is 2160.

"That is the time you can touch,” he says.

Ask someone who is 100 years old whether it's a long time or a short time, and oftentimes they'll say it was a short time, he adds.

"When they understand that this is life threatening, then you can imagine that okay, we made this cell phone in the last 30 years, great!” he says. “But if the same effort and upscaling goes into CO2 then you can actually believe that this can be solved."

The idea is that once people understand what climate change means, it informs all actions going forward.

In Iceland, where there's a strong cultural mythology, Magnason says myths can also be powerful teachers. Prometheus, for example, went to the highest mountain and came down with fire and gave it to humans, and now the combined fires of humans — which we can call emissions — are fires in our cars or fires in our coal plants.

When the Eyjafjallajokull Volcano erupted in Iceland in 2010, it emitted 150,000 tons of emissions per day and closed down airspace for nearly a week in the western hemisphere, Magnason says.

"Humans emit about 100 million tons per day. This is like we've opened up 650 of these volcanos every day, every hour, always,” he says. “If we believe 650 active volcanoes isn't changing anything, you're either really optimistic, or you've been misled by people who don't want you to believe in volcanos."

He describes an Icelandic myth he thinks is particularly salient: A woman makes a deal with the devil, and in exchange, she promises that she'll give him her as-yet-unborn child. She goes about her life, but eventually, he returns to claim the child.

"This is an excellent metaphor for the human conditions that we have used all this power from the underworld to make our lives easier...all this work the oil has done for us,” he says. “And now the time has come and they are claiming their unborn child from us, according to science."

Despite this, Magnason remains optimistic. He's certain that the infrastructure of the future will include carbon capture devices, and that a deep understanding of climate crisis will inspire action. His one-man show ends on that hopeful note — a choir of children takes center stage and they sing one simple lyric of a date, "2175."

The date is a representation of the year in which there will still exist a person who these children will know and love. And when they understand climate crisis in this very personal way, he says, it will be impossible not to take action.