In rural Tabasco, Mexico, a community of 50 3D printed homes is now under construction.

The U.S.-based nonprofit New Story has teamed up with the tech company ICON to build the world’s first 3D printed neighborhood. It’s part of their project working to combat global homelessness.

Brett Hagler, the company’s CEO and co-founder, says a machine that’s on an X-Y axis will ooze proprietary cement mix out of a nozzle.

“It looks almost like soft-serve ice cream,” he says. 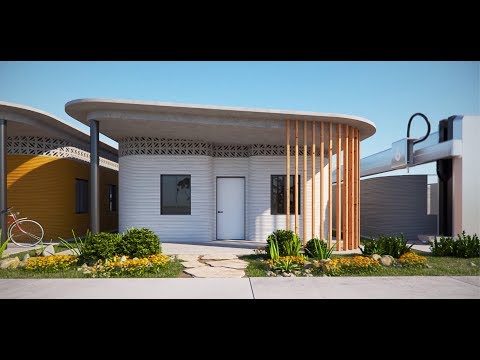 The machine starts at the very bottom of the home, layering the cement all the way to top where a roof is then placed. Start to finish, the entire process takes just 24 hours to print.

The company hires local workers to do the necessary labor, Hagler says. The 3D technology and automation makes building homes faster, but workers are still required to attach the roof and doors, and install plumbing.

“We bring in the technology to make it faster, cheaper and ultimately a better product,” he says, “and then be able to have local labor to add on the other components that are necessary.”

Each 3D printed home will have two bedrooms, a living room, kitchen and bathroom. Each home can withstand hurricanes and are seismic-approved in case of an earthquake, Hagler says. Being strong enough to stand against natural disasters has a “generational impact,” he says, because families can pass the home down from generation to generation.

New Story started in 2010 after a catastrophic 7 magnitude earthquake devastated Haiti, leaving millions injured and homeless. Seeing the damage “broke my heart,” Hagler says. He says when he went to donate, he couldn’t identify a forward-thinking charity that was pioneering innovative technology and development work in the region.

Instead of traditional methods, he founded New Story to be able to face large scale disasters with new robotic technology that can quickly rebuild communities in dire need. In the case of residents of Tabasco, families there are living for less than $3 a day.

Now, using New Story’s printer, known as “Vulcan 2,” they are able to quickly build safe shelters. For now, Hagler says they are not publicly revealing how much the operation costs. However, he says they don’t want to keep this innovation to themselves.

After their project in Tabasco, they hope to service other nonprofits who are working toward ending global homelessness.

“The big idea is to open source and democratize,” he says, “and try to get this technology into the hands of other housing non-profits and other governments that have agendas to solve very serious problems in their towns and their cities.”

Marcelle Hutchins produced and edited this interview for broadcast with Peter O'Dowd. Serena McMahon adapted it for the web.