Garrett McQueen defends what he did, saying he mixed in works by Black composers and added more contemporary music to reflect the current moment of racial reckoning in the U.S. McQueen's actions are just the latest in an ongoing movement calling for more diversity in classical music.

Brandon Keith Brown, a classical conductor based in Berlin, argues that classical music can change the racial conscience of society. He recently penned a Medium article titled "It's Time To Make Orchestras Great Again — By Making Them Blacker."

A concert hall is a magical place, but as a Black man, Brown says it is made abundantly clear that those spaces are made for white people.

Orchestra halls are historically spaces for upper-middle-class white people “to separate themselves from people of lower class and people that are different than them,” he says. That’s why there are often few Black people in orchestra audiences today.

“There is always still even that sense of not belonging when you go,” he says. “And it also sometimes can follow me very much on the podium when I'm conducting an orchestra as well.”

This sense of not belonging extends to classical music itself, Brown says, because it is historically an elitist art form.

“Every time you've given Black people access to an art form, athletics, we have dominated,” he says. “I think one of the biggest fears white people have is that Blacks will come in and dominate this space and take away the space from them.”

Less than 2% of musicians in U.S. orchestras are Black, and only 4.3% of composers are Black. Black people are ready and able to step into these roles, Brown says, but they haven’t occupied more space because white people want to keep the status quo.

“This woke me up, to put it very frankly, to the fact that I'm Black before I'm a conductor,” he says. “I will never be seen as an orchestra conductor before I am Black.”

Classical music has failed to attract a diverse audience because it secludes itself by race and class, Brown says. You can see it in advertising for classical music performances, he says, which tends to ignore the exchange of cultures.

In an orchestra’s advertising, promotionals are often “just saying, 'We're playing in this hall. You should come in. And if you don't, you're low class. You're less educated. You're not sophisticated,' ” Brown says. “And so I do speak a lot on the racial aspect, but you've got to realize that classical music is saying no to the working poor.”

In other words, classical music is not welcoming new people into its world. As a conductor, Brown says it’s his responsibility to “reach across racial lines” and bring more people in.

“If we can remind people that we're all human and we have the same feelings through sound, if we could do it through this way,” he says, “I think that this is something, the shared empathy that will go out into the street.”

The empathy people experience through classical music could change everything about our daily lives, he says.

“This is something that is going to allow us to sit next to each other on the train without white people getting up when I sit down. People won't grab their purse when I pass by and switch it to the other side,” he says. “And maybe the police would stop shooting us.” 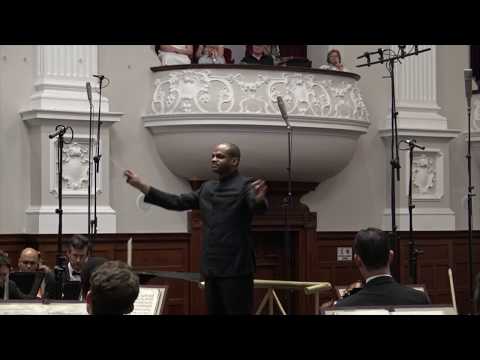 Brown says he’s been listening to the concert a lot during the coronavirus pandemic because it’s “a prayer for hope” that can help give us a vision for the future.

“For me right now, this is one of the only pieces that gives me this calm and a sense that eventually things will be better,” he says. “I mean, things, of course, are not going to go back to normal. It'll be forever changed. But I think that we can say, definitely, something will be better.”

Lynn Menegon produced and edited this interview for broadcast with Peter O'Dowd. Samantha Raphelson adapted it for the web.