Jim Parsons is one of nine gay actors starring in a new Netflix production of Mart Crowley’s groundbreaking play "The Boys in the Band."

Best known for his role as Sheldon in “The Big Bang Theory,” Parsons plays Michael — a gay man living in New York City in the late 1960s who throws a birthday party for his friend that ends in disaster. 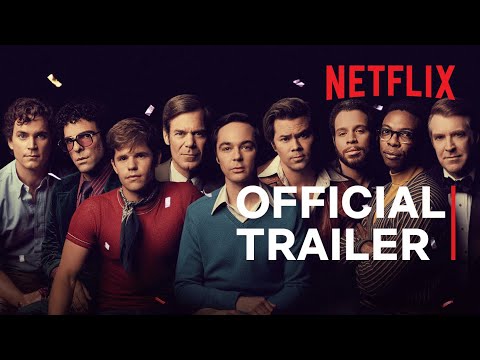 "The Boys in the Band" debuted off-broadway in 1968. A 2018 Broadway production celebrating the play's 50th anniversary, which starred the same cast as the Netflix film, won a Tony.

When the play first debuted a year before the Stonewall riots ignited the LGBTQ rights movement, it shocked audiences, who weren’t ready to accept gay men at that time. The play marked the first time gay men were the central or only characters in a work, Parsons says.

The play also gave audiences one of the first looks into gay culture and how gay people gather together. People found this “intriguing and wonderful,” Parsons says, but opinions shifted after Stonewall and the start of LGBTQ liberation.

“This piece has really gone through a tumultuous history as far as it being rejected in many corners at different times by the very community it aimed to represent, who said ‘we don't want to be represented this way. These people seem to be self-hating. They have to hide,’ ” he says.

Playwright Crowley wrote a “brutally honest” story based on what he saw and experienced, Parsons says, which is in-part why the play is still relevant today.

His character, Michael, seems to hate himself and the fact that he’s gay at times. He spends money as a form of therapy and his friends give him a hard time for being broke.

When an old friend shows up unexpectedly, Michael suggests a twisted party game where each guest has to call someone that they've truly loved from their past on the telephone. The old friend is married to a woman but his sexuality is unclear. The scene displays a cruel, dark side to Michael.

In one of the final lines of the play, Zachary Quinto’s character, Harold, tells Michael that “you are a homosexual and you don't want to be, but there's nothing you can do about it,” Parsons says. He believes this is the root of Michael’s problems.

For Parsons, the premise of Michael’s game is “heartbreaking,” considering Michael and the other characters lived in a time where gay people were made to feel like deviants.

“Michael wants to force each of them into going through this to realize how ridiculous the idea of true love is for a homosexual — that as a gay person, you will never know what it is to love. Not in the way that everyone else gets to,” Parsons says. “And I just believe that they were living in a time that was teaching them that.”

Looking back on his life, this resonates with Parsons. Spending years working with this cast on and off brought him to a healthy realization about his experience living as a gay man in the United States in 2020: He doesn’t face the overt homophobia of the 1960s.

“The hiccup with that is that it makes it easier for someone like myself to ignore the more subtle ways in which I've been signaled in my youth growing up … [and] even now, sometimes, little things that you just kind of push it aside,” he says. “But there is a part of me that that does hurt. And to not acknowledge that nick, if you will, on your heart, on your soul is to let it fester.”

Working with nine gay actors as the main characters was a “powerful experience” for Parsons, he says. In most of the other pieces he’s worked on, he doesn’t think as much as half the cast was gay — and he didn’t realize something had been missing.

The experience made him realize he couldn’t take these important things for granted anymore.

On March 15, Parsons and his husband tested positive for COVID-19. Their mild to moderate cases included chest pressure, fevers and fears that things would take a turn for the worst. They both recovered — but not without losing their sense of taste and smell first.

A week prior to Parsons falling ill, Crowley died on March 7 at age 84. Parsons thinks Crowley would be surprised by how strongly his story resonates with today’s audiences.

“I think that like so many great works, they realize their place in the canon, as it were, of great literature or moments in history much, much later,” he says. “And partly that's because you can't know until it's stood the test of time the way a piece like this has.”