One of the most iconic photos in American history was taken 51 years ago on May 4, 1970.

It was the day when armed National Guard troops were called to confront unarmed college students at a peaceful anti-Vietnam War protest at Kent State University in Ohio.

Kneeling over Jeffrey Miller in that unforgettable photograph — sometimes referred to as the Kent State Pietà — is 14-year-old runaway Mary Ann Vecchio, her arms extended in anguish as he dies.

Jeffrey Miller’s brother, Russ Miller, can’t escape the picture, taken by John Filo, that freezes his brother in time. But recently, a new photograph that he has never seen before brought him joy.

Russ Miller and his brother — who Russ Miller describes as “very intelligent” — were close siblings. While he’s tried to remain positive since the massacre occurred, he says some people have “never recovered” from the trauma of that deadly day.

“It's as if somebody has stolen something from you. You wonder what could have been. Who would Jeff have become?” he says. “All those things are just big question marks.”

Three others who died were on the cusp of becoming what they always strived to be — 19-year-old Allison Krause, 20-year-old Sandy Scheuer and 19-year-old William Schroeder.

History looks at the picture of Jeffrey Miller dying on the ground with sympathy. Now, it's widely considered a warning about the foolishness of turning an armed force on unarmed citizens. 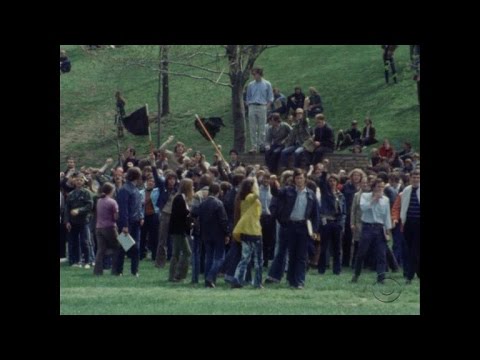 At the time, anti-Vietnam War unrest was widespread. A Kent State ROTC building was burned. Later, government-commissioned investigations determined that the firing on Kent State students was completely unwarranted. The crowd was documented as relatively tame when shots rang out.

Yet polls showed a huge swath of Americans blamed the students for their own deaths. Former President Richard Nixon called them “bums.” Russ Miller says his own father held that view about the protesters.

“My own father reacted just the way I would hope nobody would react,” he says. “And I remember my mom received a lot of hate mail. A lot of people, you know, said stuff like ‘Jeff deserved it.’ And so it was really quite the shock.”

Russ Miller choses to focus on the good that came from tragedy. The Kent State shootings marked a turning point for the U.S. in the Vietnam War, he says, so that’s what he holds on to more than five decades later.

There are communal aspects that he holds near and dear to his heart, too. A May 4 memorial was erected overlooking the university’s commons. And as the years passed, he learned new tidbits about his brother through other families impacted by the shooting.

In 2007, Sandy Scheuer’s roommate, Janice Reinstein Stone, surfaced to say she invited Scheuer to go to the anti-Vietnam War rally to meet up with Jeff Miller. Russ Miller had no idea that his brother and Scheuer, another victim, were connected in any way. They weren’t in the same location when they were shot, he says.

Stone says Jeffrey Miller and Scheuer were dating at the time and crafted a Crayon drawing together about two weeks before the shootings. Stone kept the drawing in her house, and it dawned on her years ago that others needed to be aware the painting existed. Now, the painting, called “Who Is To Say?,” lives in a special collection at the Kent State University Library.

(Miller, Jeffrey and Sandra Scheuer. "Who Is To Say?", Kent State University Libraries. Special Collections and Archives, accessed May 19, 2021.)

“It is so nice to know that he had met somebody, and who knows where it would have gone,” Russ Miller says.

But sometimes, he says he feels guilty because everyone remembers his brother because of the Pulitzer Prize-winning photograph by John Filo. “So many people lose family members and nobody knows,” he says.

To Russ Miller’s pleasant surprise, a completely different photo recently surfaced of his brother. Denise Litton of Geneva-on-the-Lake, Ohio, contacted Russ Miller just after this past anniversary with great news.

Litton was 17 years old when she was driving back from a concert in Cleveland with her friend, Pattie Hadley Hines. The two got lost, so they picked up a “cute kid hitchhiking,” she says. “Back then, pretty much everybody did it.”

Hines grabbed the camera and snapped a picture of the “sweet” and “laid back” hitchhiker in the backseat of her 1962 Chevy Biscayne, she remembers.

This hitchhiker turned out to be Jeffrey Miller. The girls met him just three weeks prior to the Kent State shootings.

Months passed before it dawned on her that this hitchhiker was the man shot during the Kent State massacre. She never knew for sure, until decades later when she took the photograph to the Kent State archives, which confirmed it was him.

“It may have been his last picture that anyone had taken,” she says.

From there, the university connected her and Russ Miller, who now has the picture prominently framed in his family room. The Miller family lacked pictures of their beloved son and sibling, so Litton’s photograph was immediately comforting, Russ Miller says.

“This picture that Denise came up with is exactly who Jeff was,” he says. “... It makes me smile every time I look at it. That's exactly who he was. And I didn't have any pictures that actually showed that. How wonderful that here we are 51 years later and something brand new pops up.”

Litton says she never would have believed how impactful her picture was.

“It just blesses my heart that it's touched him so gravely,” she says.

The two share a friendship over a picture of Jeffrey Miller the way he should be remembered, Litton says, as “a young man hitchhiking his way around and enjoying life.”

Robin Young produced and edited this interview for broadcast with Karyn Miller-Medzon and Todd Mundt. Serena McMahon adapted it for the web.