Texas Gov. Greg Abbott has said he will sign the permitless carry bill headed to his desk, which would allow anyone over 21 in the state to carry a handgun without a permit or license.

The majority of Texans oppose the measure, as do many state and local police. Texas would be the 20th state to adopt a permitless carry law.

Critics of the so-called constitutional carry law, including many in law enforcement, say it will put citizens and first responders at risk at a time when there's a nationwide surge in gun violence. But supporters maintain it protects Texans' constitutional right to carry handguns to defend themselves.

The bill was pushed through the first legislative session since the 2019 El Paso shooting, where a gunman killed 23 people in a Walmart. On Sunday, state Rep. Joe Moody, a Democrat who represents northern El Paso County, described on the floor of the legislature how he waited in a room with Gov. Abbott and the victims' families for news on who had been killed. 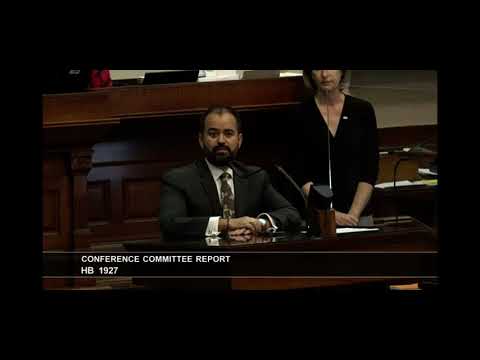 After the tragedy in his county, Moody recalls the state legislature promising to work together and take gun safety seriously. He’d worked on the issue before, but he says he felt “consensus in the room” around background checks and promoting safe weapon storage for the first time.

“These are all things that people agree on — Republicans, Democrats and independents,” he says. “But when we got into the thick of legislative session, you know, there was no room for nuance. There was no room for a policy discussion because absolutism is the only thing that prevails in this political environment.”

The legislature passed one gun safety measure that allows the state to prosecute people who lie on background checks. Only the federal government could do so previously.

But if people don’t need a permit to carry, the state won’t have opportunities to catch people lying on background checks, he says.

The permitless carry bill will make the state less safe, he says. The bill does not extend the right to carry to people prohibited by law, but Moody says there’s no way to enforce that.

“Unfortunately, it's going to lead to other communities across Texas going through tragedies like we experienced in El Paso,” he says.

The El Paso border community has not yet fully healed from the trauma suffered in August of 2019, he says, just months before the coronavirus pandemic hit. He feels that this bill adds to the existing trauma.

As a gun owner himself, Moody says he thinks most Texans share his views on guns: believing in safe storage, training and background checks.

“That's what most Texans believe. But those are not the people that vote in political primaries,” he says. “And that's why a poll can read that way. But the politics of it and get pushed in another direction.”

“This bill should be called common sense carry because this bill is about common law-abiding citizens being able to carry commonly owned handguns in common public places for the common reason of personal and family protection,” he said last month after the bill passed the Texas House.

“Sensitive places where the unlicensed carry of a handgun is prohibited will still be prohibited,” Schaefer said. “But if you are a law-abiding citizen age 21 or older that can legally possess a handgun, you will be able to carry that handgun in a holster in public places where it is not otherwise prohibited."

Some will argue wider open carry laws could have allowed someone to stop the shooter in El Paso, or point out that gun restrictions in California didn’t stop the shooting in San Jose this week.

Under this new bill, Moody believes people who get rejected at one gun store will continue exploring other options to get one. And people break criminal laws all the time, he says, but that doesn’t mean legislatures should eliminate them.

“I think that's the all-or-nothing approach that we need to start rejecting,” he says. “There is a way to accomplish safety and protect people's rights, but also say that those rights come with responsibilities.”

Karyn Miller-Medzon and Alexander Tuerk produced and edited this interview for broadcast with Todd Mundt. Allison Hagan adapted it for the web.