A new chilling documentary unspools the world of surveillance cameras.

Despite having cameras on cell phones, police officers, drones and just about every street corner, “All Light, Everywhere” shows how we as humans might still see what we're looking for.

Cameras can distort reality. We also have blind spots, for instance, and police body cameras don't look backward at the officers.

Axon also makes tasers. Director Theo Anthony reminds viewers that early moving picture cameras were made from weapons like the rifle — a person operating the camera pulled a trigger and filmed.

“All Light, Everywhere” gets at the heart of the question: Is the camera a weapon?

A majority of residents of an all-Black neighborhood in Baltimore think so. A private aerial surveillance company’s CEO tried to convince residents to allow planes first used in wartime to constantly fly over their town looking for criminals. Despite adamant pushback, the company won the city contract.

"The eye only sees in each thing that for which it looks, and it only looks for that of which it already has an idea,” a quote said in the documentary, underscores the bias in A.I. and algorithmic policing, Anthony says. It’s what the community in Baltimore is fighting against, he says.

“When you have policing practices that are driven by algorithms that point police officers to heavily-policed areas, you have to stop and ask, well, where are they getting that data? And that data is coming from previous policing activity,” he says. “If that policing activity is based along racial or economic lines, then you just have a self-reinforcing cycle of criminalization and enforcement of that criminalization.” 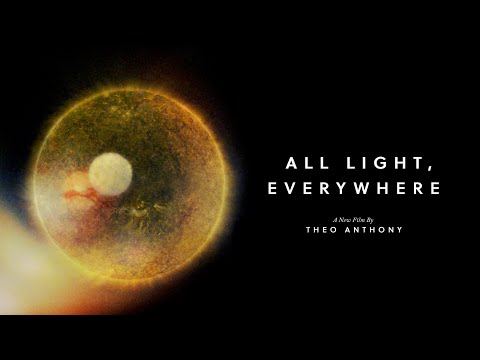 “I was always surprised that the camera was the least talked about being in the room. It seemed like the most obvious object that was so obviously shaping conversations and the power dynamics. Who was in front of a camera? Who is behind the camera? There's lots of moments we could look at in history.

“We really zeroed in on this moment, the transit of Venus, which is this astronomical event where Venus crosses the face of the sun. And if you can measure that from different points on the Earth, you can establish the solar parallax, which is really a key number for determining global positioning and navigation systems that are still used today. But the interesting thing with that is that for every one person you try to record that event, there was a different recording of it. So even then, people were bumping into the limitations of the observer and how the act of observing in itself obscured the observation.”

On the argument that surveillance cameras have benefits

“That kind of obscures the fact that these modes of surveillance are creeping into more and more areas of our everyday life. They’re in our shopping cart transactions [and] they're in job interviews where they're assessing the emotion of the interviewee. And we use crime as a way to sort of justify this further intrusion. And it kind of covers up the larger movement that's happening.

“With regards to the George Floyd murder, I think it's really important to point out that it wasn't body camera evidence that brought out this one incident to the world. It was the video taken on a cell phone of someone at the scene of the crime. It was actually not a body camera footage that was responsible for bringing images of that brutal murder to the world. And so when we look at the ways in which body cameras are sold to the public — that they will supposedly bring accountability and transparency to policing — I think it's really important to understand that very often it's used for the exact opposite. It's actually to disprove the civilian perspective and the civilian account of things.”

“I think that's a very convenient stance to have when that perspective that [cameras don’t] take sides nine times out of 10 backs up your own perspective. You know, that goes down to the very camera design, which way it points, how much it records, how much it doesn't record. … A camera is not meant to see everything, and that's because of the way that use of force works in our country. When you're looking at whether a use of force was justified or not, you're looking at whether they had enough information at the time to justify a use of force. So by not visualizing the entire image, you're actually giving more leeway to the police officer and always skewing toward their perspective.”

On what happens to police body camera footage

“I think what happens to those videos is it's not just the camera. The cameras, Axon doesn't just sell a body camera, they sell an entire software management suite that's kind of like a Dropbox for police officers where you plug the camera in and it automatically gets uploaded to their cloud. So what you're looking at is an entire image factory that is controlled and operated by the police officer. They control the capture of it. They control the storage and they control the distribution.”

On the website Evidence.com, a database where police body camera videos get fed into artificial intelligence in order to analyze and compare footage

“I think this idea of cataloging and ordering the world as a means of controlling the world is something that's a very old story. And I think that when you look at it in this light — in the way in which these videos are controlled through evidence.com and their distribution, and there's little to no policy on how that video comes to public — you really see a means to sort of control the image.”