This year’s summer Olympics mark the second time Tokyo has hosted the games.

The first was in 1964. Tokyo had been selected to host the 1940 summer Olympics, but the games were canceled because of World War II.

To mark Japan’s recovery from the war, torchbearer Yoshinori Sakai — a Japanese athlete born in Hiroshima on Aug. 6, 1945, the same day the United States dropped the atomic bomb — lit the cauldron in 1964.

After an emotional Opening Ceremony, Japan's women's volleyball team won gold in the final against the Soviet Union.

The year 1964 was packed with historical events: The Beatles played “The Ed Sullivan Show” in February. The World's Fair was in New York that year. The U.S. was at war in Vietnam. The Civil Rights Act was signed into law. Muhammad Ali was the heavyweight champion of the world.

Athletes and fans remained focused on the sports during the Olympics despite everything else going on during that time, says author Roy Tomizawa, who wrote the book "1964 - The Greatest Year in the History of Japan: How the Tokyo Olympics Symbolized Japan's Miraculous Rise from the Ashes."

Tomizawa argues that the ‘64 Olympics represented a rebirth for Japan — a mile marker of all that went before and all that came after.

The games took place 19 years after the end of World War II. Photos from after the war show that bombings left parts of Toyko in rubble, he says.

“The challenge was phenomenally great. I mean, Japan was devastated,” he says. “So getting to the games and then running a fantastic one, according to all the visitors, that achievement was unprecedented.”

The first-ever Olympics in Asia earned the Japanese praise for “their efficiency, modernity and friendliness,” he says.

“I think the most important thing was the consensus in Japan. From government to corporation to student, all the way down the line, it was universal: Everyone wanted the Olympics to succeed,” he says. “And that's why it was such a watershed moment in Japanese history.” 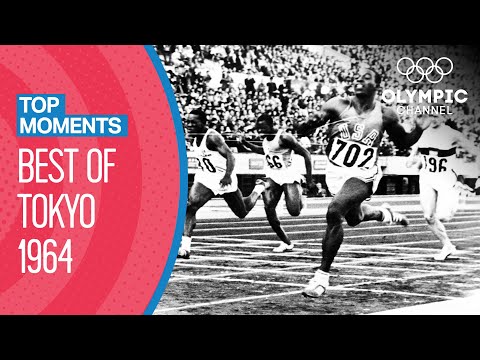 On how Tokyo made the games run so smoothly

“The biggest reason there was this huge momentum from the economy, what we call the Japanese economic miracle. Japan had found its strength in the export markets and the Japanese were at a moment of great innovation and creativity. You know, necessity is the mother of invention, as they say. And so tremendous creativity and innovation in the 1950s and 1960s, particularly in the major manufacturing industries like automobiles and electronics, for example. So the whole country was humming and everyone was working hard to get the country back on its feet. And so when the Olympics came around, it was actually a time to breathe and pat themselves on the back. I think they were all amazed at what they had accomplished at that point.”

“I don't think the Japanese government or the Japanese people would wish this situation on any other host city. Any decision to cancel, proceed or postpone all have issues. I think in a way, the only logical decisions have been made so far. I sort of wish personally that the organizers and the Japanese government agreed on having fans in the stands. There was just too much evidence that you could do it. You know, even in Japan, professional baseball had upward of ten thousand people in the stands on game day last Saturday or two Saturdays ago. Team France and Team Japan had a basketball friendly in Okinawa, which was also under a state of emergency, and they had people in the stands. And of course, you know, in America, there are people in the stands in almost every professional event there is. So there was a professional wrestling match in Tokyo Dome, I think, a few days ago. So, you know, I think there is enough signs that we could have done it. But obviously the organizers felt that the public sentiment was so negative and that they have to respect that. And I respect that, too, even though I had a lot of tickets.”

“I don't think there were surprises as such, but they had endless anecdotes and stories of those days. And to me, it was just such a revelation to hear about how they thought about Japan. I felt honored to be able to hear their stories and to play them back in the book. It was always my dream while I was writing the book that when we had Tokyo 2020 that they would come visit during the Olympics and we would grab tickets for their event in ‘64 and watch it together and just have a grand old time. And of course that never came to be so.”

“I wish I had asked [him] more. He passed away before I could ask him questions when I was writing the book, but of course he had brought back all sorts of memorabilia from those games, coins and patches and things of that nature. And I do remember him talking about the Japanese women's volleyball team, about the training that they underwent so that they could be as good as they were. But we're a family of sports fans as well. So, you know, we just love sports. And when he was working for NBC and they had regained the contract to the broadcast, I was hoping secretly one day that I could get on some sort of NBC team to help out. But that never happened.”

“I was quite lucky. But I suppose part of it is that anything dealing in the Japanese language is going to be a challenge for researchers and having to conduct all the interviews in Japanese, for example. But you know what? They could have translated probably books written in Japanese into English. I guess perhaps the interest in sports books is not as great as I would like. But on the other hand, I was quite fortunate that was material not covered so I could go in with eyes wide open.”

Alex Ashlock produced and edited this interview for broadcast with Jill Ryan. Allison Hagan adapted it for the web.