Editor's note: This segment was rebroadcast on June 13, 2022. Find that audio here.

Broadway's "Girl from the North Country” is a powerful touch-down in Depression-era Duluth, Minnesota.

The city, not coincidentally, is also the birthplace of Bob Dylan, whose music creates a sometimes other-worldly soundtrack for the struggling, fighting and hoping souls who find themselves at a place known as Nick's boarding house one cold winter in 1934.

The show is written and directed by Conor McPherson, who showcases music in a way rarely seen on Broadway, expressing emotion — passion, despair, yearning — but not advancing the plot through lyrics. And it works, touching audiences in ways that some say are hard to even describe. 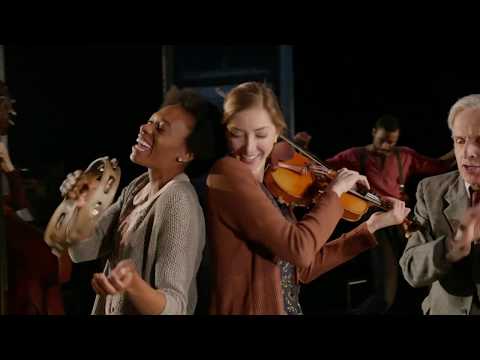 Sanders, who plays the patriarch Nick, explains the non-traditional role of music in the show as “sort of an outer sphere to our inner sphere,” he says. “The outer sphere which is hope.”

Hope, of course, is hard to come by during a cold, bleak, cash-starved winter in 1934 Duluth — particularly as the bank prepares to foreclose on the boarding house that physically and metaphorically holds the family together.

As the only cast member who doesn’t sing until the final number, Sanders says that his character doesn’t have the relief or emotional outlet afforded to the other characters.

“Nick is so much in the moment trying to get everyone through on his shoulders while sort of holding up the roof of this house that’s gradually falling apart around them,” he says.

Winningham, who plays Nick’s wife Elizabeth, calls her role a dream come true. Her character, suffering from dementia, is both distant — sometimes seeming oblivious to the people around her — but also at times the one with the greatest insight. Elizabeth’s one-line quips and occasional monologues are as funny as they are moving and revealing.

“They’re all stuck in this hell-hole where every single character is at their wit’s end,” she says. “And in some ways, Elizabeth has the relief of having her mind be faulty.”

Director McPherson describes the show as a nativity play, Winningham says, where there’s a Joseph (a boarder at the inn), a Mary (Nick’s daughter) and a baby coming (the result of Marianne’s mysterious pregnancy).

But Winningham says Elizabeth’s mental state allows the character to move in and out of the music “which allows her to kind of be in the God world of the lyrics, which are so prophetic and poetic and they sit in another place than the drudgery of the night and the cold and the desperateness.”

Among the songs Winningham sings — with incredible clarity and depth — are Dylan classics “Like a Rolling Stone” and “Forever Young.”

The lyric, “How does it feel?” she says, “comes at a time when every character is wondering that thought.”

Actor Sprawl, who plays Marianne, says her character, a young Black woman adopted by the Laine family after she was abandoned at the boarding house, “doesn’t give you everything at once.” Marianne is introspective — dealing with the isolation of being different, the fear surrounding her pregnancy and the pressure her father is putting on her to get married.

The final member of the Laine family, played by Bates is Gene, is a young man yearning to be an artist at a time when there are no jobs or opportunities.

“He’s the troubled youth of the era,” Bates says. “He turns to alcohol, he turns to fighting, and he’s just in the wrong place at the right time. We’re all just flawed characters.”

Sprawl jokes that she didn’t know much about Dylan before getting involved with the show. She says she knew the song “Make You Feel My Love” because Adele sings it. She laughs while confessing that she also knew “Blowin’ in the Wind” — only because it was featured in “Forrest Gump.”

Bates, on the other hand, says Dylan’s music had always resonated with him. He praises the show’s new arrangements and orchestrations, including his show-stopping “I Want You,” which is a slow, heart-wrenching duet with his love interest played by Caitlin Houlahan.

What does Winningham like about Dylan’s voice? “All of it, everything about it!” she says. “And he also has incredible range and he changed pop music. His voice, which is easily imitated, is not easily imitated.”

She says the music lends itself perfectly to this Depression-era tale and adds that “I don’t find these characters depressed, I think they’re desperate. There is so much fire in this piece because everyone is so hungry.”

“It’s kind of like a giant bomb going off,” she says. And Sanders agrees.

“It’s like a hive. Everyone’s buzzing,” he says. “And everyone’s wrestling with how they’re going to move forward and out.”

He says that the fact that the characters are wrestling is a testament to their need to go on. That fact is punctuated by the finale song “Pressing On,” the first time a production of the show has finished with the tune.

“It’s a forward, positive, hopeful ballad that has a lot of energy in it,” Sanders says, noting that it’s perfect for this particular moment in time where people are also experiencing the energy of emerging from the pandemic and returning to the theatre.

Winningham says the energy is palpable during every performance.

“This play rocks out of the gate,” she adds, “and does not stop.”

Karyn Miller-Medzon produced and edited this interview for broadcast with Robin Young and Chris Bentley. Miller-Medzon also adapted it for the web.