Ryan Holiday isn’t a trained philosopher, but hundreds of thousands of people turn to him for a daily dose of wisdom and insight.

Through his website The Daily Stoic, Holiday spreads the ancient teachings of Stoic philosophers such as Marcus Aurelius, Epictetus and Seneca. He’s also written best-selling books about Stoicism, and he hosts a podcast on it.

Holiday’s status as a college dropout makes him a “pen-and-ink philosopher,” a term Aurelius used to describe people seeking a deeper understanding of philosophy on their own. Although he did discover Stoicism in school. As a student journalist, Holiday approached a speaker at a conference and asked what he reads. The speaker introduced him to the work of Epictetus and Aurelius — ideas he felt he could utilize.

For example, at the heart of Aurelius’s “Meditations,” the emperor says the reader needs to figure out how to handle annoying, jealous, short-sighted people without anger.

“It was just an entry point into a philosophy that I did not know existed,” Holiday says. “And that like a lot of people, I actually needed because being a person in a frustrating world is difficult.”

More than 10 years and 10 books later, Holiday has cultivated a wide audience. Pen-and-ink philosopher or not, Holliday takes his role in the Stoic movement seriously: A note on his desk reads, “Am I being a good steward of Stoicism?”

Focusing on aspects of Stoicism like the indifference and avoidance of controversy might garner more attention, but Holiday says he aims to highlight the aspects of the philosophy that can most benefit people.

“We don't know how many Stoics there were in Greece or Rome. But when I look at the numbers of how many people get the email or respond on Instagram, it's probably the largest community of Stoics that have ever existed,” he says. “And not being the emperor of Rome, there [are] certainly some doubts that creep in from time to time.” 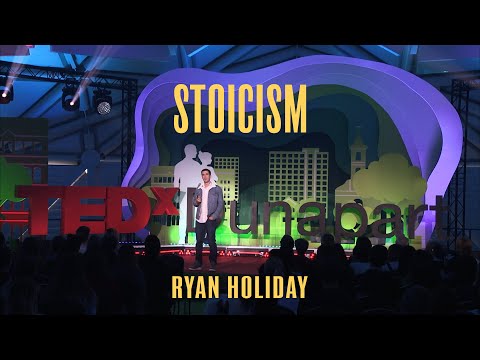 On the origins of Stoicism, which began when founder Zeno of Citium wandered into a bookstore in Athens after a shipwreck. Holiday recently opened a bookshop outside Austin, Texas, named The Painted Porch Bookshop after the place in Athens where early Stoics gathered.

“[Zeno] walks into a bookstore in Athens and they're doing a reading of Socrates. And he walks up to the bookseller afterward and he says, ‘Where can I find a man like that?’ speaking of Socrates. And the bookseller points him to a philosopher who's walking by. This changes the course of not just Zeno's life, but in many ways, Western civilization. And I love this idea that the philosophy was founded in a bookstore. Zeno would later joke that he made a great fortune when he suffered a shipwreck because although he loses everything, it changes everything.”

On Aurelius’ ‘Meditations,’ which Holiday based his book ‘The Obstacle is the Way’ on

“Aurelius says, 'Let us waste no more time arguing what a good man is. Just be one.' What's incredible about Marcus Aurelius and the ‘Meditations’ is that it's one of the only philosophy books that was never intended to be published. So he's writing to himself about what he needs in that moment as the most powerful, overworked, overstressed, criticized person in the world.”

On his daily Stoic practices

“I think it would be hard to distinguish between stoicism and journaling. Journaling is a form of Stoic philosophy. Stoicism is the practice of writing down and talking about these things. Epictetus says that in his lectures. He says, 'Every day and night. Keep thoughts like these at hand. Write them, read them aloud. Talk to yourself and others about them.' I think that's what Marcus is doing in 'Meditations,' and I try to work through what I'm thinking about, what I'm struggling with, where I'm falling short, where I could do better. And I try to remind myself in writing down these principles so they get absorbed into the mind, the DNA, so that when big moments happen, when you are tested this way or that way, you pull up the wisdom of those teachings.”

On monetizing his work

“When I think about how philosophy was subsidized in the past, I look at Greece or Rome and I see a slave economy, an economy based on plunder and privilege. I'm glad that that doesn't exist. Seneca can sit and write these beautiful writings and letters and not have to work a day in his life because his bills are paid by Nero. Right. So I don't see that as a super just system.

“[Nero] was a terrible, murderous tyrant. We live in an economy where artists are supported directly by the people who like their stuff. Is it perfect? No. But sometimes I'll be criticized by academics who think that it's weird. And I go, look, nobody's taking out hundreds of thousands of dollars worth of debt to pay to attend my classes. I am reminded of a thing that Seneca says, 'Why can't a philosopher be wealthy provided that their money is not stained in blood as long?' As we're doing it fairly and justly, I can sleep at night knowing that I've done what I can.”

On people who might use Stoic philosophy and his writings to excuse racism, misogyny or inequity

“If you're taking Stoicism to mean you don't have to care about other people, any number of these things that you would like to basically just mean you don't have to do stuff you don't want to do anything, you're missing the point. And when I think of the four virtues of Stoicism, which Marcus Aurelius calls 'the touchstones of goodness,' there's nothing in the world better than these four things. It's courage, self-discipline, justice and wisdom. So I find it very hard to buy the argument that Stoicism means don't have to care about what's happening to the planet, in social justice, what's happening in Ukraine. Marcus Aurelius says there [are] two types of plagues. He says there's the one that can take your life and he says there's the one that can destroy your character. Of course, you have to care about these things. In fact, Stoicism is a framework to teach you not just how to care about these things, but I think how to be part of the solution and not the problem.”

On a piece of Stoicism he wants to share

"One of my favorite quotes from Epictetus. He says, 'Remember, it is impossible to learn that which you think you already know.' And I think of Stoicism then as a form of intellectual and philosophical humility that's forcing you to question yourself, to question things. And I've always taken that reminder to heart."

Karyn Miller-Medzon produced and edited this interview for broadcast with Gabe Bullard. Allison Hagan adapted it for the web.