Every year, thousands of independent musicians submit videos to NPR’s Tiny Desk Contest in the hopes of being discovered. As we have for the past two years, the ARTery convened a panel to choose its favorite from among the 212 Massachusetts entries. This year, it's "Slick Talk" by Kweeng Doll.

Kweeng Doll's video stood out for its wit, poise and bouncy, irresistible beat. All five of our panelists — myself, journalists Karen Muller and Candace McDuffie and musicians Anjimile and Tim Gearan — agreed that nothing matched the originality of Kweeng Doll's agile rapping and genderbending look. Last week, I met up with the musician in the Fenway neighborhood of Boston. Allow me to introduce Kweeng Doll:

It’s a hot, windy day in Boston. D’Mitry Bolden stands outside the construction zone where his old high school is being rebuilt. Against a backdrop of dumpsters and traffic cones, he’s defiantly glamorous in a black dress, soft pink eyeshadow and a cascade of dark hair. And then there are his nails — glittery, pink and more than two inches long.

It’s a pretty typical look for Bolden, who is better known as Kweeng Doll, a Boston-based rapper with a growing local fanbase.

This loud, too-hot street corner is a special one for the 23-year-old. Just down the block is Machine, the recently-shuttered gay nightclub where he used to sneak in as a teenager. Across the street is the Boston Arts Academy high school, where he studied vocal performance and decided to become a rapper.

"When I figured that out I was like, 'How can I be a rapper and be this non-binary artist? It doesn't work like that,'" Kweeng Doll says.

Kweeng Doll came out as gay when he was 12. He accepts any pronouns — he, she, they — and over time, his look has become more feminine; people sometimes ask if he’s transgender. But that label doesn't fit.

"I'm just an androgynous person," Kweeng Doll says. "Some days I may feel more masculine than other days. Some days I feel more feminine."

Growing up in Syracuse, New York, Kweeng Doll always had a flair for performance. He competed in Irish step dance competitions and performed in high school musicals when he moved to Boston. Female emcees like Missy Elliot and Nicki Minaj helped shape his nightclub-ready rap.

"I like to make people twerk and shake their booties. That’s just kind of what it is," Kweeng Doll says simply.

Even his stripped-down Tiny Desk Contest video makes you want to dance. In it, Kweeng Doll sits poised on a stool, draped in a silvery shawl. Flanked by a drummer and keyboardist, he unleashes combative rhymes with impressive precision. 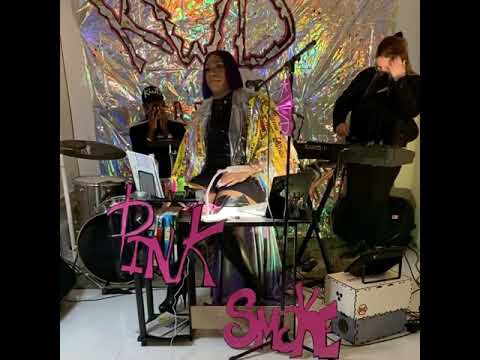 Kweeng Doll has only been performing publicly for three years, releasing one EP, 2019's "Pink Smoke," and a handful of singles. Most of his songs are pretty much unprintable, not just for their free-wheeling use of cuss words, but for their outrageous raunchiness. Take, for instance, the song "Hercules," a minor-key banger  in which Kweeng Doll declares, among other things, "The d is Hercules — hard and strong."

Explicit lyrics are common in hip-hop, and Kweeng Doll says he’s no different than any straight artist who raps about sex. His songs are drawn from real life.

"Queer people are always afraid to really talk about things that really happen in their everyday life, because they think people won't relate," he says. "But I disagree. People relate to anything that sounds good and that has meaning."

It’s not easy to be a queer rapper in the often hypermasculine world of hip-hop, but it's not without precedent. To understand an artist like Kweeng Doll, it helps to know something about his mentor — and primary artistic touchstone — Big Freedia. Big Freedia is perhaps the most famous performer of a New Orleans style of hip-hop called bounce. Proudly gay, with a gender-fluid style and a fondness for big hair and loud jackets, Big Freedia made queerness in hip-hop not just visible, but cool — you've probably heard her featured in songs by Beyoncé and Drake.

Kweeng Doll first met Big Freedia after one of her concerts in New York. The New Orleans musician ended up hiring the aspiring rapper to do her hair and makeup when she came to Boston. (Kweeng Doll's day job is as a hair and makeup stylist.) The two instantly clicked.

Reached by phone, Big Freedia describes Kweeng Doll as a "daughter." "I'm just happy to be an inspiration in [Kweeng Doll's] life," she says. "Just on an everyday basis, you know, because it's rough when you're black and you're gay and you're still trying to find your way in the world."

Which, in case you hadn’t guessed, is exactly what Kweeng Doll’s doing.