Billy Dean Thomas logged onto our Zoom call on Monday morning from their snug kitchen pantry in Mattapan. Well, it used to be a pantry; now it’s a makeshift recording studio, fitted with a new door over the summer to isolate the room from the kitchen. The Boston-based rapper, sporting a variegated blue shirt with the words “Stressin & Flexxin,” an ode to their recently released EP “For Better or Worse,” leaned back in their chair, an assortment of microphones and instrument cables inhabiting the shelves lining the pantry walls behind them.

The dawning of election day hit us both at once. “It’s crazy we’re meeting a day before the election,” Thomas said with a nervous laugh. “It’s insane this is happening right now.”

But considering how enormously the ostensible electoral outcome weighed on our conversation, nothing seemed as inequitable to Thomas as their recent censorship on social media following the release of their video for “Trump vs. Biden,” the earnest linchpin of their new EP. “Instagram shadow-banned me, and Facebook won’t promote my ads because my project has the word ‘Trump’ in it,” they explain. “Literally the text I got [from Instagram] says, ‘This post is containing information that will persuade voters.’” Considering the song’s mindfully neutral political stance, it’s a startling realization of censorship fragility just days before the most emotionally tumultuous election in recent memory. Meanwhile, Thomas aims to make up for lost ground with a fresh merch drop on Bandcamp. 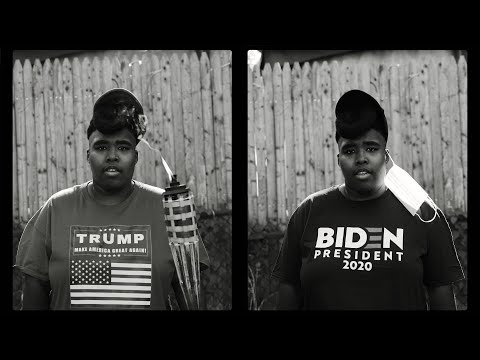 The irony of the situation is not lost on the socially conscious rapper, whose body of work largely represents a disenfranchised voice amongst corrupt and weighted systems. Thomas, who is black, queer and nonbinary, has long felt the ostracization of their identity within governing bodies, both politically and artistically. “This just feels like a testament to my work, period. This is what I talk about; this is why I do what I do,” they say. “It’s very easy to just oppress a person and tell them, ‘Oh well, it doesn’t fit the standards.’”

It’s obviously a hard pill to swallow, but for Thomas, their career has been marked by a series of triumphs that tend to be overlooked by a populace within the mainstream. The recent censorship, while maddening, is rendered as just another oppressor against a black, genderqueer artist who has worked tirelessly to achieve notoriety.

Though opportunities have unfolded for Thomas with time, the road has never been paved with gold. As an undergrad at Smith College in the early 2010s, financial obstacles mounted as stability became precarious. Thomas was often couch surfing between Western Massachusetts, their native Harlem and Atlanta as their path of academia led to Boston. All the while, Thomas focused on their craft as a storyteller engrossed in intersectional identity politics and social justice, melding the rapid, confident flow of a slam poet with the grit and reverence of a student of golden era hip-hop (Thomas is also known as “The Queer B.I.G.”).

Fortunately, Thomas found financial security resources as a New England-based artist through nonprofits like The Theater Offensive and the Boston Foundation, of which the latter awarded Thomas the $15,000 Brother Thomas Fellowship grant in 2019 to pursue their creative endeavor. In 2015, ABC’s “The View” invited Thomas to perform live on their program, a signal to their widening spread as the tide of social justice issues began sweeping the nation later in the decade.

And yet, despite a greater audience, Thomas still felt a disconnect in their immediate community. “I’ve always felt like I had to prove myself because people were either ignoring me or treating me like I wasn’t there or that I’m not good enough,” they tell me as we discuss the genesis of their voice in Boston’s hip-hop community.

Their impassioned 2018 debut release, the hard-edged “Rocky Barboa,” showcased the rapper’s propensity for swift, articulate fluency, each song a self-testament to their abilities as a spokesperson representing the voice of an outsider. But the keystone of Thomas’ current emotional turbulence is their relationship to systems outside of theirself, a central theme behind “For Better or Worse,” a unique glimpse into the realm of self-analyzation for the outwardly observational rapper. “For this project as a whole, what I found in making it is the desire to prove myself less,” they tell me. “In my previous works, I was trying to show you the rapper Billy Dean Thomas. Now, I’m trying to show you the person.”

What makes “For Better or Worse” a true example of this endeavor is how candidly it was created. In partnership with producers Rilla Force and ALFii, Thomas approached a majority of the seven-song EP without a concept or plan; instead, the rapper worked through a series of freestyles as an attempt to unlock and unload a store of emotional weight repressed under the conditions of the election and the lingering issue of identity within community. “Usually I’m a lot more contemplative,” Thomas notes. “But for these songs, I wanted to tap more into the emotional aspect. I just pushed play and whatever came out is what happened on the album.” The result yields a collection of songs varying from systematic distrust (“Trust No Mo”), witty flow flexing (“Xan for Xan”) and the fine line between hustle and equilibrium (“Stressin & Flexxin,” “Balance”) that offer a spontaneous unveiling of self.

There’s also a greater parallel to draw between the overarching seclusion of most Americans through the pandemic. “I wasn’t even thinking about isolation because of the pandemic; I was thinking about isolation because of my identity, because of not being from Boston.” Thomas adds: “But that’s why I wanted to release it right now because the feelings that I’m talking about are not just about my identity; they also can resonate with everybody because we’re all collectively sharing an experience.”

“One of the things that I really wanted people to take away from it was feeling a sense of understanding and not feeling alone,” Thomas shares. “There’s a lot of topics that I hit on in this project about trying to use that isolation to manifest a community.”

It says a lot about Thomas, who despite having achieved so much, still feels like an outsider, but whose focus is still only peripherally self-involved. Their spirit and voice are a gift to people of color and the LGBTQ+ community who need support and encouragement to thrive in a system conclusively rigged against them. “I’m really trying to open up my world to different people and have people come in and hang out with me,” they say. Don’t waste this precious chance.