The Massachusetts Department of Public Health is asking all providers in the state to immediately pause distribution of the Johnson & Johnson vaccine after federal officials on Tuesday recommended a halt due to reports of rare blood clots.

The DPH said in a statement that the directive is being given "out of an abundance of caution" as the CDC and FDA review six reported cases of the rare condition, none of which have occurred in Massachusetts.

The abrupt pause in distribution of the J&J shot is causing confusion throughout the state — and increasing concerns that it will make more people reluctant to get vaccinated.

"It is definitely a disruption to the system. My biggest concern is the impact that it might have on those people who are already vaccine hesitant, who we've been working toward educating and building trust in the vaccine and who may now become more entrenched in their vaccine hesitancy," said Felix Zemel, director of Inspectional Services in Methuen.

The city of Methuen notified almost 600 people with scheduled appointments Tuesday to go to local hospitals for their shots instead. But it was so sudden that not everyone was aware that the state had paused use of the vaccine because of potential risks.

"We had a lot of people show up at the clinic today who either ignored the email or didn't get the email, or signed up after the email had already been sent out saying that it was canceled," Zemel said. "So we've been directing them to other clinics."

"It is definitely a disruption to the system. My biggest concern is the impact that it might have on those people who are already vaccine hesitant..."

Methuen started using the J&J vaccine last week when the state notified the city that it was available. Zemel says they received 1,200 doses last week and used about half of them. The city offers vaccines to those who live and work in Methuen and opens up appointments to the general public when possible.

Gov. Charlie Baker often has spoken about the J&J vaccine as a game-changer for the state's vaccine distribution strategy, describing the single-dose shot as a way to accelerate vaccination speed and capacity.

Throughout the state, some of those with appointments scheduled for the J&J vaccine were notified that their appointment would change, or the type of vaccine would change. But some didn't receive notice at all. It is not yet known how many previously scheduled J&J appointments in Massachusetts will be affected.

"I'm optimistic that I will get an appointment sooner rather than later," Kimmerer said. "I would love it if I could keep my appointment and get even a two-dose vaccine." 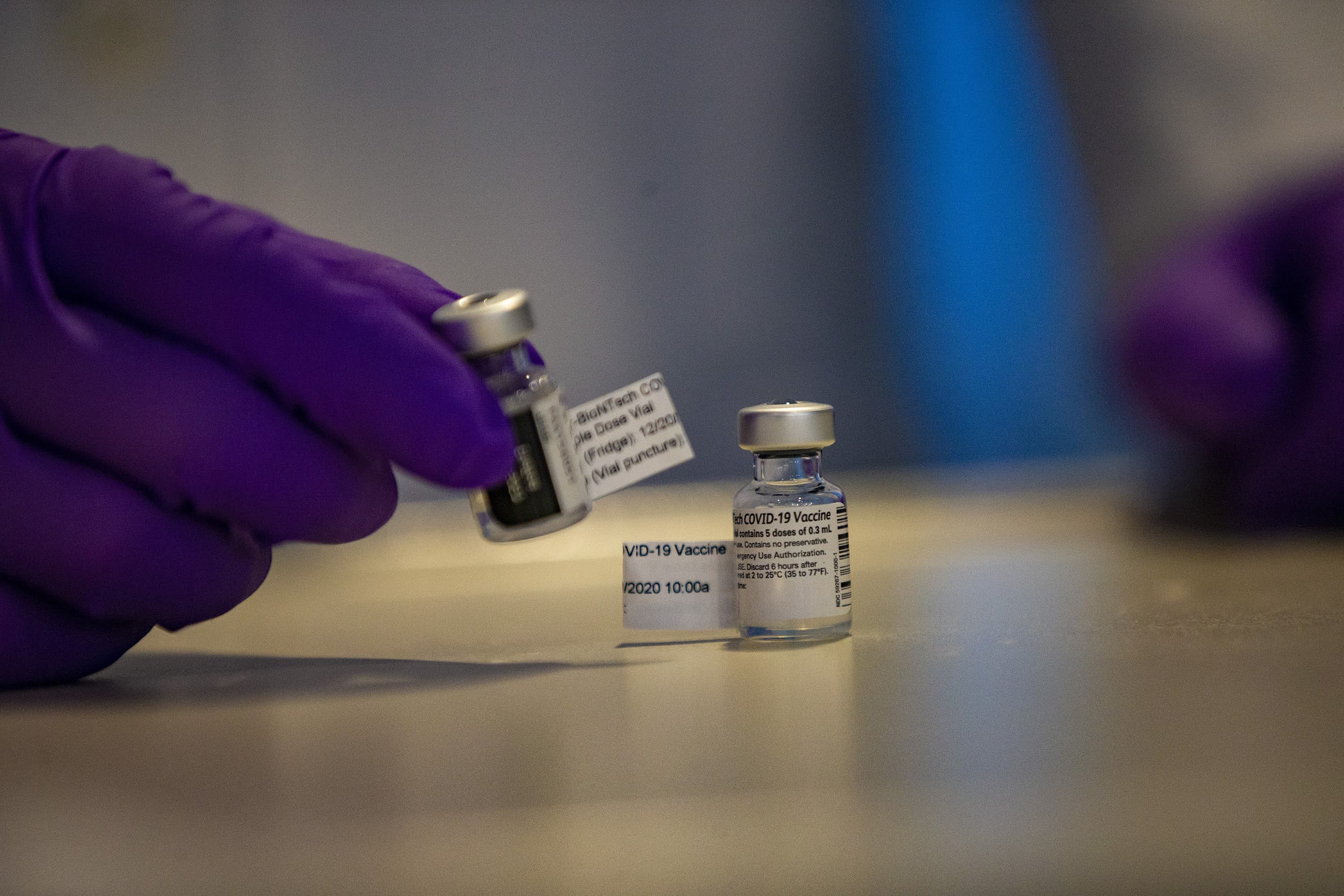 The town of Rutland planned to distribute 6,000 doses of the J&J vaccine next week.

One of the people signed up was Pauline Holland, a 23-year-old Worcester resident. She received an email Tuesday morning from the Rutland vaccine team telling her that they are waiting on more information and will be in touch about options. Holland says she's going to continue to look for appointments.

"I've been on the state wait list for two months now and all I get are these recurring text messages that say I'm pre-registered and nothing ever comes of it," Holland said. "So now I'm back to stage one trying to find another vaccine."

At this point, Rutland health officials say they are looking at ways to give vaccines to everyone signed up for an appointment.

"All those appointments are good as of right now and when we find out what we have available to us or what our final total of doses or other options are, then we will do what we can to to vaccinate everybody who already has an appointment," said Scott Gilroy, chairman of the Rutland Board of Health.

About 250 people who were scheduled for J&J vaccines at a clinic with the Lower Merrimack Valley Regional Collaborative on Thursday will be able to re-schedule an appointment for a Pfizer vaccine at another clinic held this weekend.

Amesbury Fire Chief and Health Director Ken Berkenbush, who helps distribute the vaccine in nine communities that are part of the collaborative, says the loss of the J&J vaccine will disrupt plans to give the vaccines to those who are not able to travel to get a shot. The fire department was prepared to deliver about 145 vaccines to people in their homes this week. Using the J&J vaccine was easier because it does not require extreme refrigeration and is only one dose, rather than the two doses needed for the Moderna and Pfizer vaccine.

"We had supplies and were ready to go with the homebound program," Berkenbush said. "That's the demographic that this impacts greatly and the program is on pause for the moment. It was easier with J&J in that it was 'one and done.' "

The Greater Lawrence Family Health Center had planned to administer about 800 J&J vaccines this week, but the clinic was able to accommodate the appointments using the Moderna vaccine. Of the thousands of vaccine the center administers each week, less than 10% were the J&J shot.

"There have been many surprises during this whole COVID pandemic and that, you know, for us the biggest piece has been sort of rolling with the changes and understanding the challenges that are coming up on a day-to-day basis," said Zandra Kelley, chief medical officer at the center. "I know that we'll continue to work together to try to figure out — how to get through the potential for increased vaccine hesitancy that this news brings."

Pharmacy giants CVS and Walgreens both confirmed Tuesday that they will pause their distribution of the J&J vaccine. "We regret any inconvenience and will follow up with affected customers to reschedule their appointments as soon as possible," CVS spokesman Joe Goode said.

Lowell Community Health Center CEO Susan Levine said her vaccination team decided they would not cancel any appointments for Tuesday, or perhaps even Wednesday, because they had enough Moderna to administer. “We are on an hour-by-hour planning basis at the moment,” Levine said.

“It may be that confidence in Moderna and Pfizer will increase because they’ve been out longer. Maybe hesitancy will remain with just J&J,” Levine says, noting that it’s too early to know how this pause will affect confidence in the coronavirus vaccines overall.

"There have been many surprises during this whole COVID pandemic and that, you know, for us the biggest piece has been sort of rolling with the changes and understanding the challenges that are coming up on a day-to-day basis."

The Mass General Brigham network is mostly administering Pfizer already, according to spokesperson Rich Copp, so they don't expect the pause to affect patients for now. Tufts Medical Center also says they're not canceling appointments for the next week since they have enough of the other vaccines to administer. At Boston Health Care for the Homeless, chief medical officer Dr. Jessie Gaeta says they have enough Moderna to administer for a few days, but the pause on J&J vaccines will "make next week very difficult."

According to state data from Monday, 181,034 individuals in Massachusetts have received the J&J vaccine so far. Because of an unrelated manufacturing issue, the state was only scheduled to receive about 12,300 doses of the J&J vaccine this week (down from 104,000 last week).

Federal officials expect their recommended pause on Johnson & Johnson COVID-19 vaccines will last "a matter of days," acting FDA Commissioner Dr. Janet Woodcock said. The exact time frame will depend on what officials learn over the next few days.

The CDC and FDA said in a statement that people who have received the J&J vaccine who develop severe headache, abdominal pain, leg pain, or shortness of breath within three weeks after vaccination should contact their health care provider.

This article was originally published on April 13, 2021.

Amy Gorel Digital ProducerAmy Gorel is a digital producer and editor for WBUR.