Want to check out the entire "Where We Call Home" series? Visit our landing page.

Our special series "Where We Call Home," on small towns. All the focus is on booming urban centers, but some small towns are experiencing a "brain gain" too. We find out why. 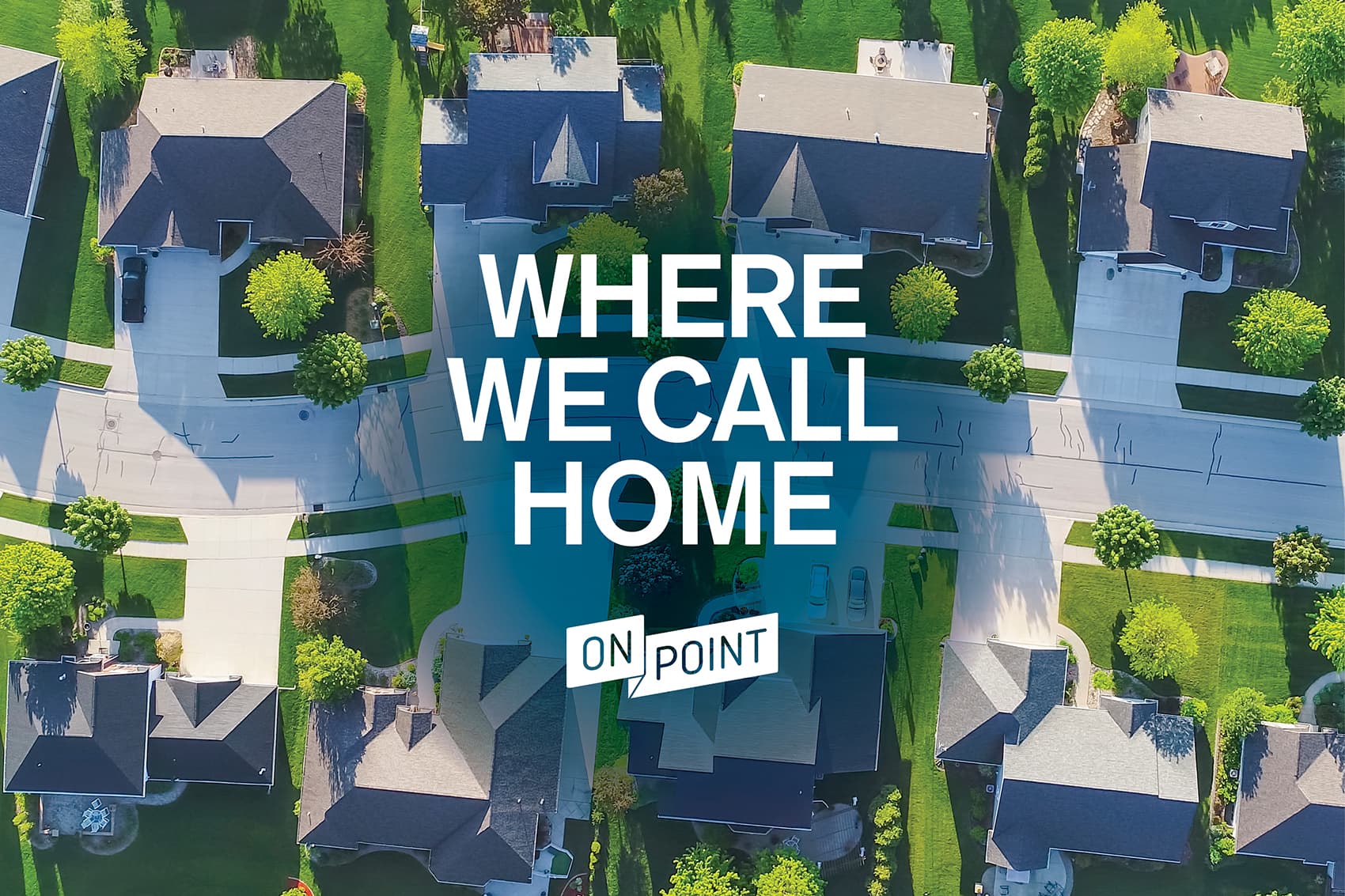 Krista Looft, administrative assistant for the town of Bancroft, Iowa. The population was 732 in the 2010 Census, and is now estimated to be about 700.

Results From The 'Where We Call Home' Survey

On how we define "small town"

Winchester: "Many times rural is not something that people define by themselves, but rural is a residual category. Essentially, things that are not urban are considered rural in a way. The urban ecology schools of Chicago in the early 1900s really started to define what this 'urbanity' meant, kind of around impersonal relationships and high population density. And then, of course, anything that didn't have that was rural, so it became kind of this dichotomy, in a sense. The census bureau uses that today. When we've got populations of 50,000 or more in an urban area or 2,500 or more in an urban cluster, they're considered urban. And essentially everything outside of that is then considered rural."

On the outward push from cities toward more rural life

Winchester: "Anytime you've got an economic relationship with an outlying area they tend to be encompassed inside this urbanized area, too. So we see these metropolitan statistical areas being generated across the country and they have really grown quite a bit. We're in the Twin Cities metro area here, and 40 years ago we used to talk about the seven-county metro area, and today it's not seven counties it's 14, it's 16 counties. In many ways, I say that it's not that people have been attaining urban status — they don't want urbanity. They want rurality, and it's the whole reason why the suburbs were born in the first place, not because people want to live in highly dense areas. They essentially said, 'This is too dense, and we're going to move out.' "

"They wanted amenities, they wanted 'life on their time' again. They wanted control over the commute."

On why folks move to more rural areas

Winchester: "We partnered up with Nebraska and we started to ask people, 'In the midst of all of these places undergoing population decline' — so the sign outside of town looks like your population is going down — but we had people in their 30s, 40s and 50s moving in, and we asked them 'Why did you move here?' The top three reasons people gave were, No. 1, it was a slower pace of life. They wanted amenities, they wanted 'life on their time' again. They wanted control over the commute. Control over where the commute is measured, where miles are the same as minutes. And so I mean that was by far the top reason was the kind of control, this slower pace of life. The No. 2 reason was safety and security — that was especially high with people with kids. And the top third reason was the low cost of housing, which we have in spades in many of our rural communities."

On misconceptions about population decline in smaller towns

Winchester: "In 1940, the average household size was 3.6. Today it's 2.6. So, essentially, when you see population loss, a lot of times it's because of household restructuring. Instead of having four kids in your house, you've got two. So imagine a town with 100 homes. Those 100 homes will be home to you know 367 people in 1940, but today it's going to be down by 29 percent, solely because of household size. So you go from 367 people to 267 people. And, obviously, if you use total population as a measure of success, you're a big failure essentially. But, when you look at the number of occupied homes, they're relatively stable. One of the big teachings I've gotten that we want to get the word out about, that we've discovered through Extension here, is that maybe there's a better mechanism to understanding our population than total population. Let's look at our housing units."

On the perception that these small towns are utopias, and concerns about the monolithic nature of small towns

"Welcome to the present day change. I mean, 100 years ago it was, 'What are these Germans doing in my town?' And, 'What are these Lutherans doing in my town?' I think there's always been some nuance here that we that we struggle with and that we overcome, but essentially, we do find a way to move forward. So I just let folks know that [they can] be a part of this change. We hear pretty consistently from these 'brain gainers' moving in that they say that — despite the negative language in town — they say, 'This is my town now.' You know, they're going to move forward and forge ahead with making this place their home."

U.S. Census Bureau: "Growth in Small Town America" — "Many people are nostalgic for “small town” America, where everyday life was commonly organized around a bustling Main Street lined with small shops and restaurants. While it is true that less of the nation’s population resides in small towns today compared with 50 years ago, many small towns have been reinvigorated in recent years.

"The U.S. Census Bureau measures population change for small towns across the country and for all areas of general-purpose government every year. These governments include incorporated places, minor civil divisions and consolidated cities. Incorporated places are the most common of these, which include cities, towns, boroughs and villages.

The Gazette: "Some towns continue to shrink, but many Iowans are choosing to stay" — "When Krista Looft first moved to the north-central Iowa town of Bancroft in 2012, she was a little concerned about starting a life here.

"She moved with her husband Jaimes, whom she met in a Future Farmers of America scholarship program while each was attending different high schools. They hit it off on a trip to Washington, D.C.

"They married young and lived in a tiny apartment in Emmetsburg while Krista studied to be an administrative professional and Jaimes a diesel mechanic at Iowa Lakes Community College. After graduating, Jaimes got a job at Deitering Brothers, one of two farm implement dealers in Bancroft.

"Bancroft is a small, and getting smaller, farming community most recently pegged at around 700 people. It’s one of the fastest shrinking of Iowa’s 942 cities. Located about 20 miles south of the Minnesota border on Highway 169, it is the second largest city in Kossuth County after county seat Algona."

"A new report from an Iowa State University sociologist identifies a dozen Iowa towns where residents believe quality of life in their community is improving at the same time the population is shrinking.

"David Peters, an associate professor of sociology and author of the report, said these towns, described in the report as 'shrink-smart' communities, show that a smaller population doesn’t necessarily denote a withering community, according to an Extension news release.

"'People tend to think of rural America as declining. They equate decreases in population with overall decline in quality of life,' Peters said. 'We wanted to ask if that’s really true, and we found that it doesn’t have to be.' "

Associated Press: "Lewisburg is a small town success story in West Virginia" — "Known for its historical landmarks and unique assortment of restaurants, along with its begonia-bedecked downtown streets and vibrant arts community, Lewisburg is adored and envied in equal measure by its neighbors in southern West Virginia.

"Defying statewide trends, Lewisburg’s population continues to inch ever closer to 4,000, even though Mayor John Manchester is quick to point out that the official tally is still 3,830 — the number that appears on the 2010 U.S. Census report. That figure won’t change until next year’s census is complete, but other summaries — like the one reported by city-data.com — put Lewisburg’s population just above the 3,900 mark today. Lewisburg has added more than 1,400 people in the last 40 years, according to figures cited in the city’s current comprehensive plan, which was adopted in late 2015.

"So, what is the secret sauce that makes this small town so special?

"In a recent interview with The Register-Herald, Manchester said there’s no single ingredient that created the city’s success or that will guarantee its continuation."

This article was originally published on March 25, 2019.

Where We Call Home