In 1961, Adolf Eichmann, architect of the Holocaust, was tried in Israel.

In Eichmann, she saw a passive, mindless bureaucrat. The banality of evil.

A line that has endured for decades as the explanation for why anyone could participate in the murder of millions.

However, newly discovered tapes from 1957 show Eichmann's evil wasn't banal at all.

Today, On Point: The Eichmann tapes and challenging the comforting myth of the banality of evil. 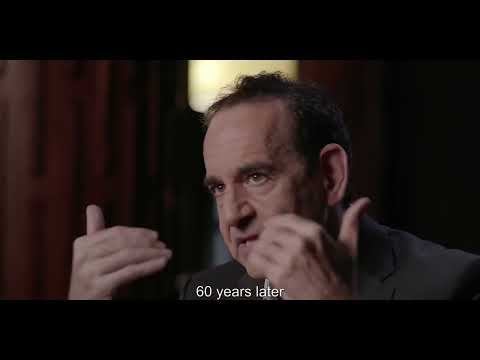 Yariv Mozer, Israeli filmmaker. He created, directed and wrote the documentary The Devil’s Confession: The Lost Eichmann Tapes. The documentary will be available on American TV later this year. (@yarivmozer)

Bettina Stangneth, philosopher and historian. Author of Eichmann Before Jerusalem: The Unexamined Life of a Mass Murderer.

Alan Rosenthal, British-Israeli documentary producer. He was assistant director and vision mixer for the international broadcast of the Eichmann trial in Israel in 1961.

Transcript: The Eichmann Tapes And The Nature Of Evil

MEGHNA CHAKRABARTI: On April 11th, 1961, Adolf Eichmann stepped into a glass defendant's box and stood trial in Jerusalem. The trial was broadcast on television, with simultaneous translation from Hebrew and German into multiple languages, including English. The proceedings commenced. Presiding Judge Moshe Landau began reading the 15 counts in the indictment against Eichmann.

MOSHE LANDAU: The accused, together with others, during the period 1939 to 1945, caused the killing of millions of Jews. In his capacity as the person responsible for the execution of the Nazi plan, for the physical extermination of the Jews, known as the final solution of the Jewish problem.

CHAKRABARTI: Adolf Eichmann was a Nazi. He was the architect of the Holocaust. Reading the indictment, Judge Landau named the locations of the Nazis greatest horrors. The camps that carried out Eichmann's orders.

LANDAU: Auschwitz. Millions of Jews were exterminated in this camp from 1941 until the end of January 1945, in gas chambers and in crematoria. And by shooting and hanging. The accused directed the commanders of that camp to use the gas known as Zyklon B. And in 1942 and 1944, the accused also secured the supply of a quantity of gas for the extermination of the Jews.

CHAKRABARTI: The Adolf Eichmann who stood in the box seemed a passive, even pathetic figure. Thick tortoiseshell glasses, balding. His body, like his hair, receding into a dark, boxy, oversize suit. Even the chief investigating officer at the trial, a Holocaust survivor himself, said that upon first laying eyes on Eichmann, he couldn't believe that, quote, 'This nerd controlled millions of Jews, their lives and their deaths.'

But at trial, Adolf Eichmann refused to accept responsibility for even one of the 6 million lives taken by the Nazis.

CHIEF INVESTIGATING OFFICER: Do you admit the first count brought against you?

EICHMANN: In the spirit of the indictment, I am not guilty.

CHAKRABARTI: Reporters from around the world came to cover the Eichmann trial. Among them, Hannah Arendt, the famed writer and political philosopher, had been exiled from Europe as a young Jewish girl in World War II. Decades later, she went to Jerusalem to cover Eichmann's trial for the New Yorker. She watched Eichmann for weeks, heard his claims about being nothing more than a little bureaucrat following the rules of the Nazi state, dutifully enacting the orders of his Nazi commanders.

'Evil comes from a failure to think,' Arendt later wrote. 'A phenomenon which stared one in the face at the trial. Eichmann was not Iago and not Macbeth,' she noted. 'Except for an extraordinary diligence in looking out for his personal advancement, he had no motives at all. He merely, to put the matter colloquially, never realized what he was doing. It was sheer thoughtlessness.' End quote. This, Arendt, concluded, was the banality of evil.

This is On Point. I'm Meghna Chakrabarti. 60 years later, the banality of evil has been so oft repeated, it's been reduced to cliché. Just yesterday, a guest on this show used the phrase when trying to explain why so many Republican operatives quickly abandoned their principles in support of the authoritarian slide that led to the Capitol insurrection. So the banality of evil has become a comforting myth we tell ourselves.

Arendt's idea that evil comes from a failure to think is a popular and powerful way to comprehend how anyone could willingly participate in the unthinkable. But in the case of Adolf Eichmann, we now know that Hannah Arendt was wrong. Because Eichmann said so himself.

This is Adolf Eichmann, his actual voice, speaking in recordings made in Argentina in 1957, four years before he went on trial in Jerusalem. And in the recordings, he says, I regret nothing.

EICHMANN: Every fiber in me resists that we did something wrong. I must tell you honestly, had we killed 10.3 million Jews, then I would be satisfied and say, good, we have exterminated an enemy … that is the truth. Why should I deny it?

Eichmann's evil is not a failure to think. Eichmann's evil is the product of deliberate thinking that made him proud to orchestrate a genocide. So it may be time for us to drop our belief in the banality of evil.

Now, the existence of the 1957 Eichmann tapes has been known for some time, but hardly anyone has heard them until now. Those clips you just heard are from a new documentary called The Devil's Confession: The Lost Eichmann Tapes. And it's director Yariv Mosher joins us now. Yariv, welcome to On Point.

YARIV MOSHER: Thank you, Meghna. It's a big honor to participate in this show. Thank you very much.

CHAKRABARTI: Well, I watched the documentary several times and it left me chilled, every single time. I wonder for you, what was your first response or first reaction when you heard the Eichmann tapes for the first time?

MOSHER: First of all, to think, to hear that such a thing exists, that a Nazi allowed himself to talk so freely about what he did to take responsibility, to brag about what he did during the Holocaust. This was mind blowing. Because all the Nazis, after the war, during the Nuremberg trials, for example, they didn't take responsibility. They all said we had to fulfill orders, like Eichmann did in the trial in Jerusalem in 1961. He did the same thing. So to think that there is one Nazi who allowed himself, while being in hiding and feeling protected, this was the thing that drove me so passionately to look for those tapes.

And when hearing them for the first time, it was a very moving experience. But, you know, moreover, I was looking to hear in those tapes, to feel the authenticity of the sound. So I looked for those sounds that gave me the feeling that this is happening. Because we knew that it's happening in the living room. They were drinking wine, lighting cigarettes. The daughter of the journalist was singing from the other room. Hearing those sounds in those tapes gave me the feeling that what I'm hearing is the true thing. And this was very powerful.

CHAKRABARTI: Yes. So that leads us to the next obvious question, which is these recordings, the Eichmann tapes were made in 1957, as we noted. And it wasn't until 1960 that Mossad abducted Eichmann from Argentina, and took him to Israel for trial. But how is it that three years earlier, Adolf Eichmann is sitting in a home in Buenos Aires and making these tapes? Who made them?

MOSHER: Well, this journalist, this Dutch Nazi journalist named Willem Sassen, convinced Eichmann to talk. Because he said, Well, one day you want your story to be known. You want a book to be published, a biography. No one knew about what Eichmann did. In fact, even Sassen himself and the colleagues, all other Nazi sympathizers who joined them in this living room, didn't really believe the stories of the Holocaust. They thought that these are all Jewish propaganda. They still believed in Hitler ... and they couldn't really believe the stories about the scale of the Holocaust.

So they wanted, in the beginning, that Eichmann will say, yes, none of this is true. But on the contrary, Eichmann was sitting there and was looking to get some credit of what will be, for him, his life achievement, the killing of so many Jews. So he denied those thoughts and said, yes, we did it. We did kill so many Jews. And he talked freely about what he did. And in a way, he was looking to get, you know, recognition for what he did in the war, which is horrifying.

CHAKRABARTI: Well, I want to play another moment from the Eichmann tapes that's in your documentary. So this is where Eichmann is sitting again in someone's living room describing how his job was, quote, the physical extermination of the Jews. And people in the room are stunned. And Sassen asks him to clarify, and Eichmann does. And here's that moment.

EICHMANN: I didn’t even care about the Jews that I deported to Auschwitz. I didn’t care if they were alive or already dead. There was an order from the Reichsfuhrer that said Jews who were fit to work were sent to work. Jews who were unfit to work had to be sent to the Final Solution. Period.

SASSEN: And with that you clearly and openly meant physical extermination?

EICHMANN: If that’s what I said, then yes, for sure.

CHAKRABARTI: We really have about 30 seconds before our first break. But in that moment, the tapes reveal that the men in the room themselves were stunned at the truth of what Eichmann was saying. And they actually tried to stop the recording, right?

MOSHER: Yes, because it didn't follow their expectations. They were sure that this is Jewish propaganda and Eichmann is saying the truth. And they were shocked, like us.

CHAKRABARTI: Well, today we are talking about the Eichmann tapes, the previously unheard 1957 recordings of the architect of the Holocaust, Adolf Eichmann. And the recordings are shared widely and publicly for the first time in the new documentary, The Devil's Confession: The Lost Eichmann Tapes.