When I was training for the Boston Marathon in 2011, I ran 115 miles a week. I won that race every day, or at least I visualized winning it. In every workout and every run, I pictured myself separating from the pack and powering down Boylston Street to break the tape.

It’s risky business putting your heart into your dreams. Coming so close that year — but failing — could have taught me to be less vulnerable, to risk less, to believe less.

There’s value in behaving like a champion every single day for years — in making it a habit. As time went on, I realized that my daily habit made me a better version of myself.

In 2018, the year I finally won Boston, we were pelted by rain and pounded by wind from the first step in Hopkinton. I felt lousy in the early miles, even apart from the brutal weather. 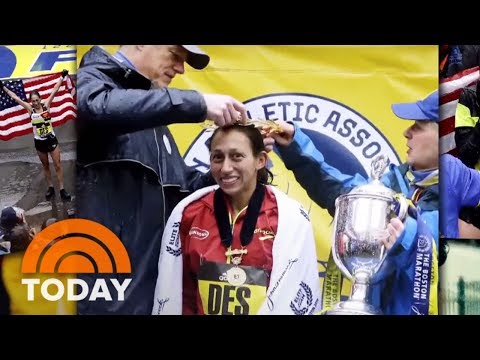 That year, John Hancock's theme for the race was "Together Forward." Around mile 6, I turned to another runner — Shalane Flanagan. I told her I was thinking about dropping out, and that I’d help her with whatever she needed until I did.

I showed up for one more mile, then one more minute. For the next six miles, I hung in, trying to get comfortable with feeling uncomfortable.

At about the halfway point, Shalane told me she needed a pit stop. I said I’d help her get back into the main pack.

Working together, we got there.

We made the right hand turn at the fire station, and as the rolling Newton Hills stretched out in front of us, spectators darted out of homes on the course to watch and cheer. Eventually, I realized that I was in third or fourth place. Couldn’t quit now.

Helping Shalane had helped me find my legs.

When I took the lead around mile 21, my mind immediately went to 2011. How often in life do we get a second chance?

There will be no Boston Marathon today, as we work together — and on our own — to defeat the coronavirus.

The empty streets on this Patriots’ Day are exactly what we need, but it’s sad and disappointing. It’s uncomfortable.

That’s OK for now. Running rewards consistency and resilience. So does life. Keep your heads up. Lend a hand to the people around you.

If we act like champions, we will all win.

Des Linden Cognoscenti contributor
Des Linden, a two-time Olympian, finished seventh in the marathon at the Rio Games in 2016. She made her marathon debut in Boston in 2007, and in 2018 became the first American woman to win there in 33 years.