The recently concluded World Economic Forum in Davos, Switzerland, featured a call to action on climate change by Sir David Attenborough, and a lot of talk among the world's economic elite about inequality and sustainable development.

Remarks from one conference attendee in particular went viral.

That attendee was historian and journalist Rutger Bregman, who caused a stir when he suggested what to him seemed like an obvious solution to many of the world's economic problems: tax wealthy people more.

Editor's Note: The video below contains some explicit language. 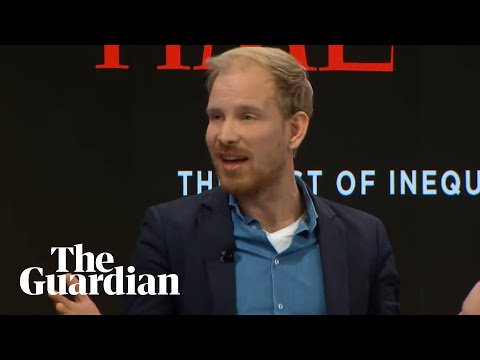 "If you walk into the conference ... there are all kinds of progressive issues that they're talking about — like feminism, climate change, and participation and inclusion. They throw all these words around," Bregman tells Here & Now's Jeremy Hobson. "But then after a while, I started to notice that there are certain subjects that you're not allowed to talk about."

When he decided to bring up the apparently taboo topic of tax avoidance during a private panel, Bregman says the reaction among people in the room was revealing.

"The response from the audience was really aggressive," Bregman says. "That was the first time that I noticed that maybe I should start talking about that issue, because that's what they didn't like."

"What happens very quickly if you talk to millionaires and billionaires about higher taxes is that they immediately respond with, 'Oh, that sounds like communism to me. That's Venezuela.' So in their worldview, the choice we have is between capitalism and gulags. That's basically it. And maybe, from a European perspective especially, that sounds quite ridiculous. If you look at the Scandinavian countries or the country where I'm from, Holland, I think that relatively higher taxes can work perfectly well together with a very competitive economy — just like the U.S. and the U.K. in the '50s and the '60s, by the way."

"What happens very quickly if you talk to millionaires and billionaires about higher taxes is that they immediately respond with, 'Oh, that sounds like communism to me. That's Venezuela.' "

On Democratic Rep. Alexandria Ocasio-Cortez's call for a top tax rate of 70 percent

"Seventy percent is actually quite conservative still, if you look at history. In the '50s and '60s, there was this period that historians call 'the golden age of capitalism.' This was the period when we had the highest rates of growth, the most innovation, when we put a man on the moon. And back then, during Eisenhower's presidency, for example, the top marginal tax rate in the U.S. was 91 percent, and the top estate tax was over 70 percent.

"This can work perfectly well together with capitalism. It's really what you need if you want to tame capitalism, because by itself, capitalism is a very unstable system and you need these kind of laws and policies and institutions to stabilize it."

"Maybe it would — and maybe it should. What you actually see, again in, for example, a country like Germany — which has better protections for labor, a stronger welfare state — you also see that actually the stock market is on lower levels than in the U.S. And indeed, the rich are not getting all the benefits from the growth over there. So I think that it would actually be a good sign if the stock market would go down a bit in the U.S. and that average workers would start benefiting more."

On critics of these policies pointing to European countries with high unemployment rates, like France, Spain and Greece

"You could also point to Denmark or Sweden, where actually the unemployment rate is quite low. And the question is also what the dignity is of the work that people have. In the U.S., there are a lot of jobs that simply don't exist in Europe, because people just refuse to do them. I'm always surprised when I'm in the U.S. to see, for example, people just saying hi to you when you're at a supermarket. Those jobs simply do not exist in Europe. I mean, it seems ridiculous to me. So I don't know, I wouldn't just focus on the unemployment numbers, but I would also want to look at the dignity of the work, and how well the work pays and if people actually find meaning in it."

On how a shorter work week could help people economically

"Actually a shorter working week is pretty much the solution to most of our problems right now. So whether you talk about climate change or whether you talk about increasing stress levels, and more and more employees having a burnout, or inequality, there's a huge amount of research that a shorter working week is the way forward. And actually this could increase productivity as well.

"It's a very old, very American idea. Henry Ford, for example, he decreased the working week of his employees from 60 hours to 40 hours in the 1920s. And he actually found out that his workers became more productive. This is what you find time and time again in the research, is that actually to countries with longer working weeks — like the U.S. — are not as productive on a per-hour basis as other countries."

"If you really want to experience the American dream, you should move to Denmark, because your chances are much higher there."

On his views on philanthropy among wealthy individuals

"I'm not against philanthropy, if people really have a wonderful project that they care about. But you have to know that these people in Davos often use philanthropy as a way to distract people from the fact that they're not paying their taxes, and also to distract them from their own corrupt business models. So many of these billionaires have made their money by coming up with destructive financial products that only destroy wealth instead of creating it. You've got all these tech giants involved in all of these privacy issues, who are basically trying to get us to click on ads more all the time.

"I really think you need to look at how philanthropy is actually being used: Is it genuine, or is it a way to distract? The only example that I know where it's really, really genuine is Bill Gates, and he gets all the attention and he's doing great work. But the vast majority of billionaires actually gives a very small percentage of its wealth to charity, and it's mostly a PR effort."

"There are different things you can learn from different countries. But if you look at the Scandinavian countries, obviously they're doing a lot of things really well. Take something like social mobility, the chance that you get up on the ladder of success. If you really want to experience the American dream, you should move to Denmark, because your chances are much higher there."

On whether he thinks he'll be invited back to Davos

"It's going to be a dilemma for them, isn't it? If they invite me back again, then I'll just say the same thing all over again: I will give my taxes, taxes, taxes speech once more. But if they don't invite me, that will only prove my point. So I wish them good luck with the choice."

Mark Navin produced this interview and edited it for broadcast with Kathleen McKenna. Jack Mitchell adapted it for the web.