Yo-Yo Ma has been giving back with his music during these uncertain times.

Using the hashtag #SongsOfComfort, the acclaimed musician has been tweeting out recordings of himself playing the cello, hoping to bring joy to those on the frontlines of fighting the coronavirus pandemic and to those who are staying at home.

“In these days of anxiety, I wanted to find a way to continue to share some of the music that gives me comfort,” he tweeted.

One of the pieces he posted on Twitter, the Sarabande from Bach’s Cello Suite No. 3., is meant for all the health workers who are “really putting themselves in harm's way and exposing themselves to great dangers.”

“And they do it because, as firemen would say, this is what they do,” he says.

For some, Ma’s #SongsOfComfort could be piercing. For others, it may be comforting, he says, such as the “Tree Tree Tree” song, which he once played for Mr. Rogers.

The idea for #SongsOfComfort sparked from asking what he could do for others. So now, he’s using his music as an act of servitude — and is inviting others to join him.

“It's really an invitation for everybody to join in because we now do have social media as a medium to give comfort,” he says. “This is what we can do for one another and be more communal.”

Take, for example, the two kids from Columbus, Ohio, who played a cello concert on their porch for an elderly neighbor who was self-isolating, The Columbus Dispatch reports. 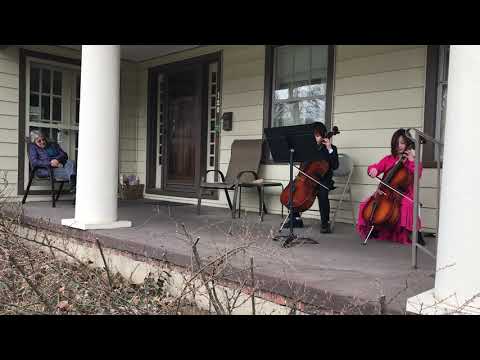 “Those impulses are so great because these are not transactions. They are gifts and they are freely offered because people are responding to need,” Ma says. “It has no economic bearing. And yet they're incredibly meaningful, invaluable.”

Emiko Tamagawa produced and edited this interview for broadcast with Kathleen McKenna. Serena McMahon adapted it for the web.