He decided to take a creative approach by offering staff large bonuses for two months to move into RVs he rented and placed on site at the Bristol, Connecticut, facility. Staff would quarantine with their elderly patients.

Two months later, there have been no COVID-19 infections at Shady Oaks Assisted Living, while the New York Times reports the rest of the state has endured 1,627 deaths in 219 facilities — about 55% of Connecticut’s total deaths.

Belanger says he knew he had to act quickly once he saw the “nightmare” unfolding at Life Care Center of Kirkland in Washington state. The news of multiple infections and deaths there served as “an alert all across the country” to start planning preventative measures against the spread of COVID-19.

“Everyone knew it was coming our way. It was coming to senior homes. And we all began to mobilize,” he says.

First, Belanger says Shady Oaks Assisted Living shut down all outside visitation in early March, a decision he described as “heartbreaking.”

Next, a checkpoint was put in place to screen all staff members for the coronavirus before they reported for work. That became difficult, though, as more information became available about asymptomatic cases, he says.

That was the moment he realized he had to rethink his plan.

“Each day here, even now, I walk the home and I look in the eyes of my residents and tears come to me,” he says. “I've got to do everything I can to save them and to find a safe way forward for our residents and caregivers.”

Shady Oaks Assisted Living — a business that has run in Belanger’s family for more than four decades — now has RVs lined up in the parking lot. The center, which normally is buzzing with 48 staff members, was whittled down to 17 people who work 60 to 80 hours a week, he explains.

Asking his staff to work exhausting hours away from home and loved ones for two months is no small feat, he says. But he says the center feels good about their decision to “bubble up.”

“We feel like we've really made a difference. And in our hometown, four out of five nursing homes have COVID-19, and one of them has over 28 deaths,” he says. “And we just know that we made the right decision for our home, for our residents and for our caregivers.”

One nurse, Faith Brouker, admits it hasn’t always been easy.

“We're here 24/7,” she says. “And just being unable to go home and be with family, I think that's everyone's biggest obstacle.” 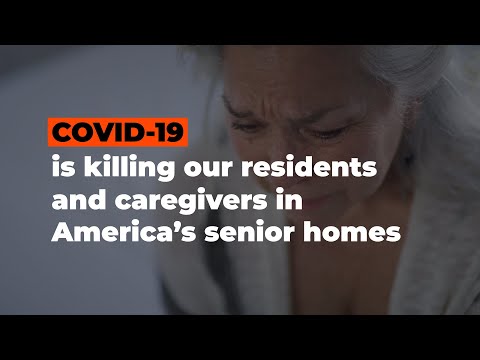 To incentivize and show appreciation for their sacrifices and dedication, Belanger draws from his personal savings to pay the living center’s on-site staff more than usual: Certified nursing assistants receive $15,000 a month, and licensed nurses pocket $20,000 a month.

Although his financial situation looks bleak, he says saving patients’ and caregivers’ lives was the biggest priority.

The federal Payroll Protection Program opened up to the nursing home, which he says has been “a huge help.” The program allows him to pay his furloughed staff in full according to their average hours before the pandemic struck.

With the loan and small donations, “we're able to take care of our community,” he says. “And the idea behind that is that sooner or later, we're going to have to open back up. And when we do, we want to make sure everybody was well taken care of.”

Although he says he’s still a couple hundred thousand dollars short from the extra expenses of RVs and pay bonuses, he has “no regrets” for doing all he could to save lives within Shady Oaks Assisted Living.

The upside is being a part of a movement “to show that it can be done by bubbling up and all working together as a close team and protecting our elderly,” she says.

Belanger says he hopes the example set at Shady Oaks Assisted Living expands into a movement far beyond Connecticut.

“This can't be just about my home,” he says. “It has got to be about all caregivers and about all senior homes. We really need to see this as a public good.”

He believes it is a public cause that should receive government funding. He’s suggested that if Connecticut, for instance, pays $25,000 per week in matching payroll funds to the state's more than 300 nursing homes and assisted living centers for the next six weeks, it would cost taxpayers $55 million.

That might sound like a hefty price tag, but he says nursing homes would end up paying “quite a bit anyways” in hazard pay, human costs of suffering and personal protective equipment if the coronavirus ravages through an assisted living center. There are additional costs if a patient has to go from a nursing home to a hospital and if a ventilator is needed.

He considers the route Shady Oaks Assisted Living has taken a “human solution” of saving lives. He says he’s aware of two other nursing homes, one in Georgia and another in Ohio, that have taken similar actions to provide on-site caregiving.

When the day comes for staff to move out of their RVs and go back home, Belanger knows he can rest assured knowing he did everything he could to protect his employees and patients. He now hopes the idea will catch a spark throughout the county.

“I speak with strong conviction that we have a way forward. And I just want this idea out there,” he says. “People should be aware that this is an option at least to bridge, to patch through the surge and then get to the other side.”

Karyn Miller-Medzon produced this interview for broadcast. Robin Young edited it with Peter O'Dowd. Serena McMahon adapted it for the web.