Jason Ward has not forgotten what happened to his fellow black birder, Christian Cooper, at New York’s Central Park.

On the same day George Floyd was killed at the hands of police in Minneapolis, a white woman named Amy Cooper falsely accused Christian Cooper, a black man, of threatening her life after he asked her to leash her dog.

Christian Cooper recorded the incident on his cell phone, and it quickly went viral. Amy Cooper was roundly vilified for threatening to use his race against him. Since the video, Amy Cooper has apologized and called her behavior “unacceptable.”

Ward, who grew up in the South Bronx and now resides in Atlanta, says he knows Christian Cooper well. He says hearing Christian Cooper’s trembling voice on the recording was “scary,” considering the situation could have potentially escalated into something physically dangerous.

“Upon watching it, there's a lot of anxiety built up having somewhat of a similar kind of experience — being black and being in nature,” he says.

It’s not just birding, he explains.

“It's always been a precarious situation to be black in America, period,” he says.

He is often out looking for birds that have been banded for migratory tracking and research purposes. Since this entails a lot of wandering around suburban neighborhoods or being alone in nature, he says there is fear and tension about what a black birder might be accused of doing.

Ward says he’s always conscious of his body language and actions when he’s out birding, such as how he reaches into his backpack for his binoculars, how he carries the binoculars or what he wears on his face when the weather turns chilly. White birders don’t have to give a second thought about these things, he says.

But that hasn’t stopped him from pursuing his passion, which began at a young age growing up in the South Bronx’s Castle Hill projects. During his freshman year of high school, his family was evicted and ended up in the New York homeless shelter system.

As a kid, he says he had affection for all animals but was especially fascinated by dinosaurs.

“I was about 65 million years too late,” he says. “I couldn't really go outside and study them.”

That love grew to an interest in birds — how they come and go as they please having the power of flight. Birds are “not restricted by any bounds” and can fly off for new, better places — something he dreamed of doing as a child under the circumstances he was living in.

“That ability was something that I wanted to be able to do as a kid growing up. So often I couldn't do that,” he says. “So I lived vicariously through them.”

He came to learn he wasn’t millions of years late to observe dinosaurs. Birds are “the only living dinosaurs to this day,” he says, and realizing that made him instantly hooked on observing these feathered creatures.

Ward now hosts a video series on Youtube and Topic.com called “Birds of North America.” The series follows Ward as he chases after birds, talks to experts such as Drew Lanham, another birder of color, and even gets a tattoo of one of his favorites — the fast-flying peregrine falcon. 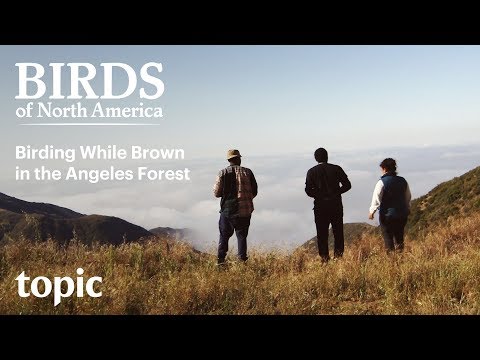 As June progresses and spring migration subsidies, Ward says he’s looking forward to baby bird season. Within the next four weeks, he says baby birds will be popping up all around the country.

Chicks of breeding species such as cardinals and robins, and of birds of prey like hawks and owls, will be ready to hop to the ground soon. It’s the “next generation of birds” growing up before his eyes, he says.

While most birders are constantly trying to find new species they haven’t spotted before, Ward argues people should appreciate the magnificence of any bird sighting. That bird could have just made the journey from South America to land in your backyard, he says.

“It never gets old” to spot a warbler each year, he says. Warblers are migrant birds that have traveled thousands of miles north during the dark of the night, he explains.

To young black folks eager to take up birding but hesitate after seeing the video footage from Christian Cooper in Central Park, Ward says to remember there are networks of people out there who are willing — and waiting — to connect, educate and help others along their “bird nerd” journey.

“The future of conservation, the future of birding, the future of how well this planet is doing with climate change — the future will be at its best if we have voices coming from a lot of different backgrounds,” he says.

Karyn Miller-Medzon produced and edited this interview for broadcast with Peter O'Dowd. Serena McMahon adapted it for the web.