Editor's note: This segment was rebroadcast on July 4, 2022. Find that audio here.

In 1967, John "Chick" Donohue set out to make a beer run for some friends in his neighborhood.

But this wasn’t any old beer run — 26-year-old Donohue traveled more than 8,000 miles from New York City to Qui Nhon on a boat, stashing cold beverages for his military friends fighting in the Vietnam War.

It all started one night when Donohue was on a stool at Doc Fiddler's, a favorite neighborhood bar in the Inwood section of Manhattan, a close Irish enclave. The bartender, called the Colonel, was outraged at anti-Vietnam War protesters in Central Park.

He and others saw the protesters as anti-soldier, and many troops were from their part of town. The Colonel's solution? Someone should bring the local heroes a beer, he proclaimed, and the bar erupted in cheers.

Donohue took the call to action seriously. The former Marine knew the country; he had been to Vietnam twice before as a merchant seaman. He soon found a cargo ship going to Vietnam and embarked on the “Greatest Beer Run Ever,” the title of the memoir he co-wrote with J.T. Molloy.

His daring feat has been chronicled in a YouTube documentary and a new book. Now, a feature film by Oscar-winning writer-director Peter Farrelly is in the works. 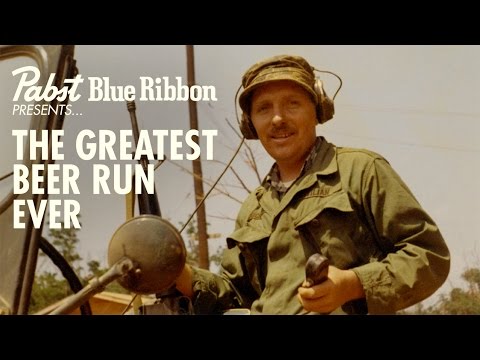 Donohue says he didn’t know what he was thinking but knew he had to do something. At the time, 28 of his buddies from the neighborhood had already died fighting in the war.

Once he set foot on shore, he miraculously tracked down his friends, most of whom were only in their early 20s. Soldiers assumed Donohue, outfitted in corduroy pants and a madras shirt, was some sort of American government agent, thus he was able to hitch helicopter rides to areas where his friends were engaged in battles.

“The longer I was there, I became aware that they're deferring to me and they didn't stop me. And I knew the lingo from being in the Marines,” he says. “So it just worked.”

Donohue let lower-rank soldiers in on the mission, and he says they got a kick out of helping him in their own way. Some of them told Donohue they could use a can of beer themselves.

When speaking with high-ranking officers, Donohue simply told them: “If I told you the truth, you would not believe me.”

And he says he somehow got away with it.

Along with his backpack full of libations, Donohue brought his friends news from home. The troops were hungry for the latest headlines, from gossip of NFL coach Vince Lombardi’s retirement to Jefferson Airplane’s new album.

Soldiers were receiving letters from loved ones plus a monthly newsletter from young women in his neighborhood, he says. But before the trip, he met up with some family members who wanted to relay personal messages to their sons.

“It was just another effort to communicate to them over there,” he says. “We did lose so many guys. We were very much aware of the danger that they were in and we cared for them.”

He met with Inwood pal Tommy Collins’ mother, Mrs. Collins, who gave Donohue her son’s address. The YouTube documentary reunited Donohue with several of the men, one of them being Tommy Collins. In the documentary, Collins recalls seeing Donohue and asking him, “What the hell are you doing here?”

“He's in a combat zone,” Collins says, “and here he is walking around like he's going on a golf outing or wherever the hell he's going.”

But the situation did become dangerous for Donohue. His ship left without him, leaving him stranded. The Viet Cong launched attacks across the country, including in Saigon, where he was located. Without weapons or gear, he was caught in the middle of a firefight, pressed against the walls of the U.S. embassy watching soldiers around him die.

He witnessed the battle unfold and saw how the shorthanded American troops still fought valiantly during the attack.

Before his journey, Donohue resented the anti-war protesters. At the end of his 8-week long beer run, though, he started to change his mind. While he didn’t entirely agree with how anti-war protesters went about their movement, he says he understood they were trying to stop a war that “wasn’t worth it.”

Shortly upon returning to the U.S., Donohue says he saw American veterans demonstrating with anti-war protesters, solidifying his new-found conviction that the demonstrators were right.

He didn’t end up seeing in Vietnam two of his friends — one died while he was there and the other was sent home with a severe case of malaria, he says.

But some good came out of Donohue’s mission. He is still good friends with the four soldiers he delivered beer to.

“The ones I saw came back and there was a lot of love there,” he says. “Still is.”

More than five decades later, they all get together every once in a while and, of course, discuss Donohue’s grand beer expedition.

“The fact that they're alive and we can talk about it now, that's great,” he says. “God's been good to us.”

We were in Doc Fiddler’s one cold night in November 1967. It was a favorite bar in the Inwood neighborhood of Manhattan, at 275 Sherman Avenue, above Isham Street. George Lynch was the bartender. We called him the Colonel. It was an honorary title, since he had made only private first class in the army. But he was a great military historian and patriot.

One day the Colonel commandeered the empty lot on the corner and erected a gigantic flagpole—something you might find in Central Park or in front of a government building. It’s still there. Every morning, he would ceremoniously raise the flag; every sunset, he would lower it. Each Memorial Day and Fourth of July, the Colonel would organize a parade up Sherman Avenue. He tapped his connections to make it huge.

He got Bill Lenahan, who was the commanding officer of the US Marine Corps Reserve at Fort Schuyler, the nineteenth-century fort in Throggs Neck that’s now home to the State University of New York’s Maritime College and Museum, to literally send in the marines to march. The Colonel’s efforts took on an even greater urgency now that we were at war in Vietnam and with so many of our neighborhood boys serving there.

The Colonel got Finbar Devine, a towering man who lived up the street and who headed the New York City Police Department (NYPD) Pipes and Drums of the Emerald Society, to lead the flying wedge of kilted bagpipers and drummers while wearing his plumed fur Hussar’s hat and thrusting his mace heavenward. Father Kevin Devine, Finbar’s brother and the Good Shepherd Parish priest, got all the priests and the nuns and the kids from the Catholic school to march, too. Another Devine brother was with the Federal Bureau of Investigation, and the Colonel convinced him to organize a contingent of FBI agents to come out from under cover and march. The Colonel was beautifully crazy.

He treated the boys who came back from the war like kings. At Doc Fiddler’s, they didn’t pay for a drink. Around the corner from the bar, in what we called the Barracks, he lived in a room with two army surplus bunk beds—one for himself and one for any GI who’d come home and needed a place to stay.

Behind the bar, the Colonel ruled. He listened and laughed and could tell a story like your Irish grandfather, doing every accent and voice, no word astray, with a finish that would cure your asthma laughing. But he was tough, and those who engaged in tomfoolery on his watch were soon jettisoned.

The Colonel had become unhappy lately with what he was seeing on news reports about the war. Antiwar protesters were turning anti-soldier. Not just anti–President Lyndon Baines Johnson, who escalated the conflict he’d inherited from President John F. Kennedy by increasing the troops from JFK’s 16,000 to half a million. Nor were they strictly focused on General William Westmoreland, commander of US forces in Vietnam, who was asking for even more troops to be deployed. Protesters were now training their sights on teenagers who’d been drafted, and on veterans who’d come home from a hell they couldn’t express. We were told that when the neighborhood boys had gone down to the draft board on Whitehall Street—many so inexperienced that their fathers or older brothers accompanied them—they’d been met by picketers carrying signs that read, “GIs Are Murderers.”

As these news scenes played out on the TV above the bar, the Colonel didn’t hide his disgust.

“You know how demoralized they must be while they’re over there doing their duty?” he would growl. “We’ve got to do something for them!”

“We’ve got to show them we support them!” “That’s right!!” came the shouts, even louder.

“Somebody ought to go over to ’Nam, track down our boys from the neighborhood, and bring them each a beer!”

“You heard me! Bring them excellent beer, bring them messages from back home. Bring them . . . encouragement. Tell them we’re with them every step of the way!”

The Colonel folded his arms on the bar and looked me dead serious in the eyes. “Chickie,” he said, “I want to borrow your seaman’s card.”

It sounded more like an order than a request.

I was a US merchant mariner, a civilian seaman working on tankers and other commercial ships. I had joined after serving in the US Marine Corps for four years into the early 1960s.

I had a seaman’s card—it’s called a “Z” card—which is like a military ID. It has your picture and years of service on it. Mine noted that I could handle ammo, because I had military clearance. It’s issued by the US Coast Guard and used in lieu of a passport.

“What do you want my seaman’s card for?” I asked.

“I’m gonna get on one of those ships that goes to Vietnam,” he answered, “and I’m gonna bring all the guys over there from the neighborhood a drink.”

During the war, civilians couldn’t fly from the States to Vietnam without military orders—not that anybody wanted to take spring break in beautiful downtown Da Nang.

But there was no way the Colonel could “borrow” my seaman’s card to sail off to the war zone. He wouldn’t know what to do on a merchant ship. Besides, he didn’t look anything like me. I had red hair, I was ten years younger—forget it, there was no way. Besides, the idea was insane. Wasn’t it?

I looked in the Colonel’s eyes to see if he could possibly be serious. Oh, he was.