If you have an idea of what it means to be a father, a new film is about to change your mind.

In “Together Together,” actor Ed Helms plays Matt, a single man in his 40s who wants to have a child. Anna, a barista played by actress Patti Harrison, agrees to be his gestational surrogate. 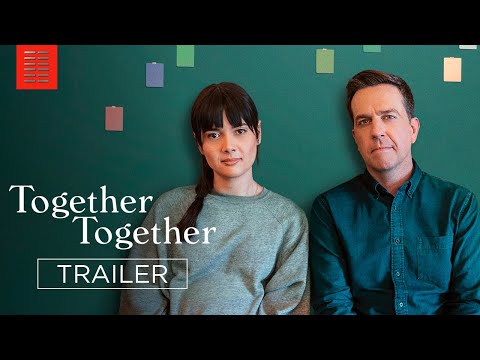 The relationship gets off to a rocky start: Matt takes Anna to dinner and frets over her food order. But over the course of Anna’s pregnancy, the two come to develop a love for each other — but not in a romantic way.

Flipping the typical narrative on platonic relationships was important to writer-director Nikole Beckwith. She says she wanted to show the true scope of how two people can evolve together without romance involved.

“I think a lot of our surrogacy narratives are a little melancholy and kind of focusing on the conflict of ‘giving up the child.’ I can see how that is dramatically very intriguing but I also think we need to balance that out. I think surrogacy is additive and is still something that’s very stigmatized and I don’t feel as though it should be.”

On men thinking of their “biological clocks”

“I mean I think that they do. I think that men have a biological clock too. Men have feelings on the subject. I think that we're inundated with stories about parenthood that are very focused on a woman — either forging that path by herself or demanding that her reluctant husband follow her into this next stage. And I do think that is detrimental to the way we perceive these questions and these issues and part of feminist film making is, of course, deepening and strengthening the representation of women on stage and on screen but the same is true for men: It is also about deepening and strengthening the representation of men on screen.”

“I’m not sure, I mean it confuses me. I think it’s very tethered to like, if a father comes by and picks up their kid from school once, everyone’s like ‘Oh my God, what an amazing father he came and picked them up,’ and meanwhile the mom has done it all other 364 days or whatever. And if she’s five minutes late it’s like, ‘Wow, five minutes late again’ and so it’s very harsh on both, you know, men and women.”

“That particular idea I think is also kind of tethered to this idea of men [becoming] fathers reluctantly. … I think that’s really bad, it does contribute to toxic masculinity, this idea of what manhood is and what it is to be, you know, a man or a father or whoever. And so obviously, this scenario between Matt and Anna and their relationship opened the door for a lot of these conversations. I wasn’t like ‘I’m gonna tell a story where I get to say these things’ but you know, I’m writing the script and they’re in their crib store and then it’s just like ‘Oh yeah, this is what would happen.’ ”

On casting Ed Helms, who’s known for broadly comedic roles in “The Office” and “The Hangover”

“When I see Ed’s work, I think like even in his most hilarious roles and the biggest comedic moments, I’m always recognizing this core of vulnerability and humanity. And so I wanted Ed for this role because I wanted a chance to see what would happen if that stuff got to be in the front seat and the other stuff was in the back seat. You know, I see that beautiful gift in him and I wanted to put a light on it.”

On exploring platonic love in the film

“I think we need to see [platonic love]. I think we’ve been conditioned to have those expectations. It probably goes all the back into time about how men make the decisions. Men have been the gatekeepers for this stuff, they ran all the studios, they directed all the movies they wrote all the movies — and then a generation of people grew up on those movies and then they [went] on to make movies, etcetera, etcetera. I think that’s really bad, and it also like reinforces this idea that the most important thing a woman brings into a relationship is something as transient and temporary as her youth or her sex appeal.

“It’s unfortunate to also just assume, age difference or not, I’m looking at two people on screen and they’re going to fall in love and that’s what a happy ending is. The relationship between Matt and Anna exists in part because of their age difference and they do get a lot from each other and communicate that and evolve together. That’s great — they don’t need to, like, be getting naked for that to happen. It’s important that we start looking at the different ways people love, the different ways people can connect. I would love to watch a movie and not know what to expect.”

Emiko Tamagawa produced and edited this interview for broadcast with Jill Ryan. Tamagawa also adapted it for the web.