The most popular song on Frances Forever’s Spotify page is titled, in the terse vernacular of the post-millennial digital native, “f--- u.” It begins with a crooning preamble. “I’ve forgotten to breathe, forgotten to read/ Forgotten to tie my shoes/ Forgotten to eat, forgotten to drink/ Because I’m only thinking of you,” Frances sings as she strums a ukulele, her voice compressed and hollow, as though recorded over the phone (or, more likely, in a Voice Memo). And then, a few lines later: “The only rhyme in this song/ Rhymes with ‘you’ and only you.”

It’s a typical lyrical trick for Frances Forever, which is the stage name of the 20-year-old singer, songwriter and multi-instrumentalist Frances Garrett. “f--- u” is melancholy, even melodramatic, and simultaneously aware of this fact. The joke is that Garrett’s infatuation has made her a bad songwriter — which, paradoxically, makes her a good songwriter, funny and self-effacing.

Those qualities are on display in the video Garrett submitted to the most recent iteration of NPR Music's Tiny Desk Contest. Though her entry didn't take home the ultimate prize, her band's performance of the original song "Space Girl" was charming enough to win over WBUR's own panel of judges, who were tasked with choosing a standout among the 254 submissions from Massachusetts. (Hence this profile, and Frances Forever's headlining slot at WBUR's CitySpace on Friday, Aug. 23.) On "Space Girl," a space metaphor-addled ode to a crush, Garrett sings, “Girl, are you a Cancer/ ‘Cause you make me cry/ When we kiss.” It’s a horoscope reference, which goes with the space theme, but more than anything the lyric speaks to the ironic-yet-heartfelt ethos of queer youth internet culture, where everyone is obsessed with astrology and love is always a little tragic, to an almost performative degree. Garrett, who identifies as pansexual, gently pokes fun at herself by invoking this cliché. Yet her recognition of the ordinariness of her feelings somehow deepens them. 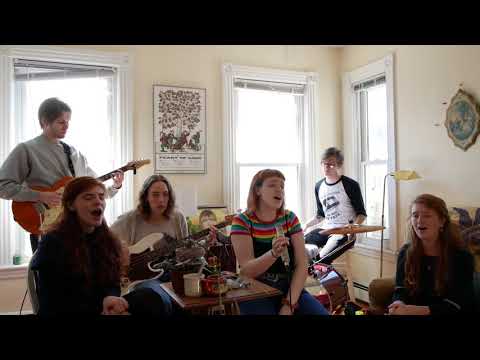 “Something that I hate about music these days is, ‘Oh, you can't put that lyric in because that's, like, a joke lyric, that's not serious music,’ ” Garrett says. “I really think that you shouldn't take yourself too seriously as a songwriter.”

Garrett tells me this on a recent afternoon when I visit her at her parents' home in Melrose, a suburb north of Boston. The family lives in a serene neighborhood near the golf course. Garrett is on break from Clark University, where she's majoring in music technology; this summer, she's employed at a store that sells “alternative lounge furniture,” aka beanbag chairs. We sit in the living room, near the piano where Garrett writes songs and the loom where her mother spins wool.

The stage name "Frances Forever" is a reference to the song "Francis Forever," by Mitski, the queen of poetical indie-pop melancholy. Garrett admires her songwriting, though she admits Mitski’s unconventional musicality — her songs’ unexpected chord structures and loopy melodic turns — is a bit beyond her. Garrett’s biggest influences are bedroom pop acts like Clairo and Sidney Gish, young female singer-songwriters who found viral success online with self-produced music that captures, in very different ways, the uncertain haze of young adulthood. (Both happen to have Massachusetts connections — Gish went to Northeastern University and Clairo is from Carlisle.) The “bedroom pop” label has been applied widely, and rejected by many, but Garrett’s music falls squarely within its blurry borders. The handful of songs she has released are disarmingly homemade-sounding, with lo-fi electronics and canned drumbeats, and though they eschew conventional song structure, they are accessible in the way pop music tends to be, with catchy melodies and soaring harmonies. It’s the kind of music that performs well on internet algorithms; “f--- u” has more than 17,000 streams on Spotify, which Garrett credits to the song surfacing on users’ “Discover” playlists.

The term “bedroom pop” is essentially "DIY" for the digital age, and it implies a certain amateurness. But Garrett is the product of rigorous musical training. Growing up outside of Baltimore, she and her older sibling both sang in an elite children’s choir that taught advanced ear training and performed complex choral arrangements. Garrett started piano when she was 6 or 7 and started writing songs when she was a teen. The siblings were homeschooled, which left a lot of time for music. (Garrett briefly tried out public school at age 13 when the family moved to Massachusetts, but she hated it.) Later, a stint at a summer intensive for high school students at Berklee College of Music convinced her to pursue music professionally.

Sitting around the family’s dining room table, Garrett’s parents, Jim and Betsy, opine on their daughter’s precociousness. She boasted a sensitive ear early on, they say, able to imitate horses and roosters "so well they would respond back to her." Garrett sits next to her father, who wears suspenders over a T-shirt. “When she was like, 2, or so, and still in diapers,” Jim begins, and his daughter interjects with a laugh. “Do you want me to just stop?” he asks, nervous that he might be overstepping, but she doesn’t. He continues: “So I took her to an IKEA bathroom, to change her diaper. And it’s all tile, it’s this big tile room, right? And she starts going, ‘Oh!’ just to hear the echo.” Even at 2, Garrett seemed preternaturally attuned to sound.

I ask Garrett’s parents what their favorite Frances Forever songs are. Betsy chooses “famous," for its narrative qualities, and “cry inside my car” — except, she says, for the end, which features a clip of a Voice Memo Garrett sent to a friend while she was, well, crying inside her car. “I have to turn it off, because it’s upsetting,” her mom says.

The sadness in Garrett’s music is inescapable. For her, songwriting is a little bit like therapy. “Every time I write about a really hard thing in my life, I definitely feel some type of clarity in my mind, and I’m like, I can sort of move on,” Garrett says. One song she wrote in the midst of a crisis of self-confidence, wondering, “ ‘Am I wasting my time here? What am I doing? Do I even matter?’ — all this stuff,” Garrett says. “And then I was sort of thinking to myself, ‘Wouldn't it be great if I could take all these nasty parts of my brain that think like this and replace it with something else,’ so I'm like a perfect person.” The result, “Frankenstein Wannabe,” is both absurd and poignant. “My pieces are made of other people’s pieces,” Garrett sings, her voice rising yearningly. She’s more blunt later on in the song: “I got no f---ing idea of where I’m going/ And I don’t deserve the love that I’m getting.” Dreading the future, fearing that you don’t deserve love — these are universally relatable sentiments. At the same time, Garrett captures the urgency and uncertainty specific to early adulthood.

When I ask Garrett what she struggles with the most, she pauses, starts to speak, and then stops. “I don’t know how to answer that,” she says. I amend the question — what does she struggle with, artistically? This time, she doesn’t hesitate: “I think, just thinking I’m not good enough in any way.”

There’s a section in “Frankenstein Wannabe” when Garrett drops her earnest croon and falls into a jokey patter; she can’t be serious for too long. “My frontal lobe is from some Russian acrobat/ My hippocampus is, I can’t remember, a cup of this and a pinch of that,” she talk-sings. And then, in a throwaway moment that’s easy to miss: “The only part of me that’s from me is the part that knows how to write songs.”

Frances Forever will perform at WBUR's CitySpace on Friday, Aug. 23. Get tickets here.